Changes to the suspension cannot hide the pick-up origins, with the Shogun Sport delivering a bouncy ride and inaccurate handling 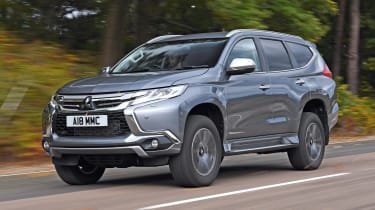 Unlike most modern cars the Shogun Sport retains a separate chassis, meaning it has more in common with pick-ups and commercial vehicles than rival family-sized SUVs. While that helps it to deliver impressive off-road performance, the big trade-off is that the Shogun Sport is much less capable of providing a smooth ride. Unlike the L200 on which it is based, the Shogun Sport has multi-link rear suspension, but even then it behaves fussily on anything but the smoothest of roads.

This lack of composure continues through bends. At modest speeds the Shogun Sport manages to be acceptably well controlled, although it is less composed than its key rivals, but driven any more quickly and the vagueness of the steering and bumpy ride make for uncomfortable progress. Although it never feels unsafe, the lack of composure does not inspire confidence and the amount of body roll is disconcerting when driving at speed. The softness of the suspension also means the Shogun Sport is susceptible to pitching forwards and back during acceleration and braking, which makes it difficult to relax behind the wheel and puts it some way behind more polished competitors. 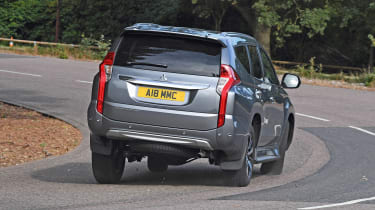 The standard eight-speed automatic gearbox means a high ratio for motorway cruising and when driven normally it provides smooth shifting. Demands for greater performance however generally result in slow changes, so it is best driven in a relaxed manner. The standard four-wheel-drive system allows you to select rear-wheel-drive only for on-road operation, and in most circumstances this is the best option to minimise fuel consumption, but the facility to send drive to all wheels may come in useful in very poor driving conditions. In addition, all versions of the Shogun Sport are fitted with ESP and Trailer Stability Assist, a useful feature for the kind of vehicle that is commonly used for towing.

Where the Shogun Sport excels is in a proper off-road situation. With the abilty to switch between high and low range gearboxes, lock the differentials and with a terrain selection system, it is capable of dealing with conditions that would easily defeat a conventional SUV. For buyers that will venture off-road on a regular basis, the Shogun Sport is a much more desirable option.

The Mitsubishi Shogun Sport is available with a single engine option, a four-cylinder 2.4-litre diesel engine with turbocharging and intercooling to maximise performance and efficiency. It was first introduced in the L200 pick-up in 2015 and while it was a relatively sophisticated engine for a commercial vehicle at the time, it is less well-suited to a passenger car like the Shogun Sport where a higher level of refinement is demanded.

Acceleration is only adequate, and lags behind much of the competition for in-gear assessments as well as the benchmark 0-62mph measure. Rev the engine hard to extract maximum performance and its lack of refinement shows, with significant noise levels across the rev range, and even at idling speeds in traffic. The engine offers a reasonable response when a demand for acceleration is made but is hampered by the sluggish response of the automatic gearbox. 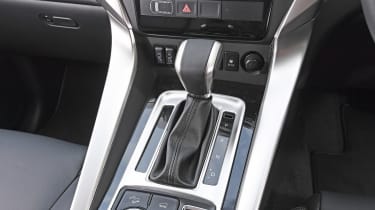 The Shogun Sport’s 2.4-litre unit provides a strong 430Nm of torque available from 2,500rpm, and although this does not translate into athletic acceleration it does, at least, promise comfortable towing up to the vehicle’s maximum of 3,100kg braked.

The overall performance figures of the Shogun Sport are below average for a car of this class, with a top speed of just 112mph and a 0-62mph time of 11 seconds. Key rivals from Skoda, Hyundai and Nissan all manage the same sprint in under 10 seconds or better, and are capable of exceeding 120mph.