Nissan has asked the British Government to invest £100million in domestic parts suppliers in order to secure the future of the company's Sunderland plant.

"Nissan will not succeed in the future, with or without Brexit, unless the Government does something to help us in the supply chain," Colin Lawther, head of European manufacturing at Nissan, told MPs on the International Trade Committee. He added: "This is critical. If we don't really invest in the supply base it will be a house of cards effect."

After receiving reassurances from the UK Government over Brexit at the end of last year, Nissan's bosses agreed to secure the future of the firm's Sunderland plant by confirming the next generation Qashqai and X-Trail will be built at the factory. Nissan also announced new investment at the facility in a move that comes as a big boost for UK manufacturing as the country heads towards Brexit.

However, the company has now said that for its operations to be successful, the UK Government must increase its spending on domestic parts suppliers if it wants the carmaker to remain successful. The company is currently having to import many of its parts from abroad, which may cost significantly more after Brexit if tariffs are imposed on UK imports. Nissan's former CEO, Carlos Ghosn said the company would "re-evaluate" its position in the UK, after a UK-EU trade deal was confirmed.

Lawther said: "The UK supply base is not competitive globally, making it more attractive for companies to purchase parts from overseas. We should put a £100million fund together quickly to repower the supply base to make us competitive and to give flexibility."

Following the UK Government's pledge to ensure the Sunderland plant remains competitive even after Brexit, Nissan said it will continue its investments in the plant and aims to increase production by 20 per cent to 600,000 vehicles a year, securing more than 7,000 jobs in the process. It's also pledged to spend an additional £2billion with UK suppliers, almost doubling the current £2.5bn it spends on domestic parts. 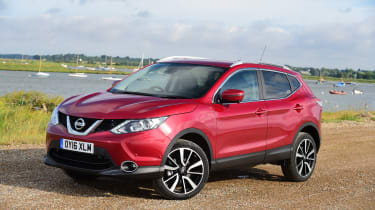 Nissan given assurances by the UK Government

The Japanese car manufacturer was previously considering whether to move production abroad, amid concerns of trade barriers after the UK leaves the EU. One option was to move the Qashqai production line to Spain, where the platform-sharing Renault Kadjar is built.

Nissan's CEO at the time, Carlos Ghosn had previously asked for the UK Government to provide "commitment" the plant's competitiveness won't be affected post-Brexit.

Ghosn said: "I am pleased to announce that Nissan will continue to invest in Sunderland. Our employees there continue to make the plant a globally competitive powerhouse, producing high-quality, high-value products every day."

Ghosn added: "The support and assurances of the UK Government enabled us to decide that the next generation Qashqai and X-Trail will be produced at Sunderland. I welcome Prime Minister Theresa May's commitment to the automotive industry in Britain and to the development of an overall industrial strategy."

However, Business Secretary, Greg Clark, has said there was no "cheque book" involved in the assurances given to Nissan. The Business Secretary indicated that no financial guarantees of state aid had been promised to Nissan, saying: "The important thing is that they know this is a country in which they can have confidence they can invest. That was the assurance and the understanding they had and they have invested their money."

Clark added the move will benefit the sector massively: "This is fantastic news for the UK economy, the people of the North East as well as the automotive industry and its supply chain.

"The UK automotive sector has had a remarkable year - exporting over a million cars around the world and today's announcement underlines the confidence in the sector. The fact Nissan have not only made a long-term commitment to building the next generation Qashqai and X-Trail at Sunderland, but decided to upgrade their factory to a super-plant, manufacturing over 600,000 cars a year, is proof of the strength of the sector."

The Sunderland plant has been a powerhouse for Nissan over the years. Churning out more than 500,000 models a year, it employs a workforce of 7,000 as well as thousands of others in the supply industry. It currently builds the Nissan Qashqai, Leaf, Juke, as well as the Infiniti Q30 and QX30 following a recent £250 million investment into the plant.

Will British car manufacturing survive Brexit unscathed? Tell us what you think in the comments below...