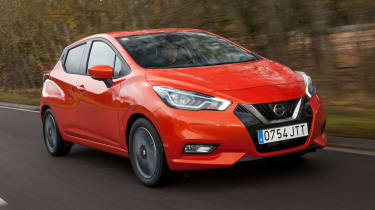 The 2017 Nissan Micra has been on sale for a few months, and now the third engine to join the line-up is available to order. The entry-level 71bhp 1.0-litre petrol starts from £11,995 in Visia grade, joining the 89bhp turbo petrol and 1.5-litre diesel.

Nissan has increased the base price of the Micra considerably for the new model, reflecting its new status as a full-size rival to the Volkswagen Polo, Ford Fiesta and Vauxhall Corsa. A boosted range of five trim levels has been confirmed by Nissan, consisting of Visia, Visia+, Acenta, N-Connecta and Tekna models, with the range rising to £17,435. 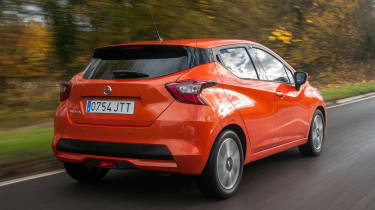 The New Micra is now available with three engines; two three-cylinder petrols and a four-cylinder diesel. The base unit is a 71bhp 1.0-litre naturally aspirated triple, producing 95Nm of torque, taking a lengthy 16.4 seconds to get to 62mph and managing 98mph. 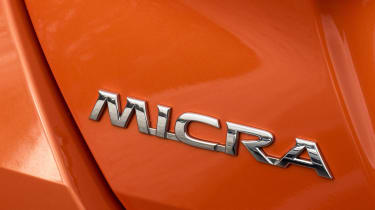 Designed specifically with European buyers in mind, the new, fifth-generation Micra hatchback is tasked with righting the wrongs of the previous generation. After it was revealed at the 2016 Paris Motor Show, we went for a poke around.

The new Micra is a crucial new car for Nissan, not least because it’s the first time an all-new Micra on a fresh platform has been launched since 2003. It’s been designed to tackle the Ford Fiesta head-on, and brand CEO Carlos Ghosn says the new car will “raise expectations” of what a supermini is capable of. 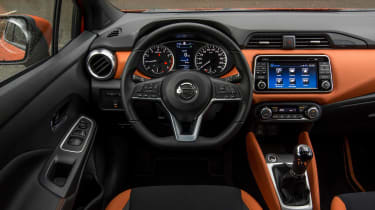 The new Micra will replace the old model as well as the Note mini-MPV, as the larger supermini will fill both roles.

New #Micra test drive - we've got our hands on an early pre-production Micra for a first drive! Let's take a look around... Read more here: http://aex.ae/2cDvztM

As expected, the new Micra’s exterior design is heavily inspired by the 2015 Geneva Motor Show Sway concept. The distinctive new body is significantly longer, wider and lower than before, with swept-back headlamps and a new iteration of the brand’s ‘V-motion’ grille design. Striking shoulder lines stretch from the bonnet down the wings and then upwards to the back doors, while the windscreen is steeply raked.

At the rear a ‘floating’ roof, sharp kink between the windows and boomerang-shaped tail-lamps complete the comprehensive restyle. Neat details include hidden rear door handles, while Nissan promises a range of vivid exterior colours and a host of personalisation options allowing buyers to put their stamp on the Micra.  The bodywork is also designed with aerodynamics in mind, with a very competitive 0.29 Cd figure claimed. 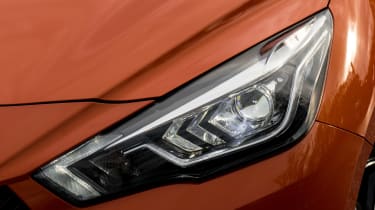 Underpinning the fifth-gen Micra is the Renault-Nissan Alliance’s CMF-B platform, shared with the Renault Clio. It’s even built in the same factory as its supermini rival, in Elins, France. The next Nissan Juke will share the same platform, showing the vital relationship between the Japanese and French brands.

Nissan is promising class-competitive cabin space with the new Micra. The previous model straddled the city car and supermini segments in terms of size, but this new one will aim to be as roomy as a Vauxhall Corsa. Nissan has also worked on introducing a lower and sportier driving position, too, with the positioning of the seat, pedals and controls set to improve driver involvement.

Although we haven’t seen it yet, a new seven-inch central touchscreen debuts allowing control of the sat-nav and media, while smartphone connectivity comes in the now familiar form of Apple CarPlay. Options include a new Bose six-speaker sound system with a speaker built into the driver’s headrest for more immersive audio.

The Micra’s chassis has been set up to offer much sharper handling than the previous iteration. Active Trace Control subtly applies the brakes to aid cornering, while Active Ride Control can tweak engine torque and brake pressure to smooth out the ride. Electric power steering has been tuned for greater response, and there’s also been a focus on reducing cabin noise.

Just two engines will be offered in the Micra at launch. The first is a Renault-sourced 0.9-litre three-cylinder turbo petrol, while there’s also a 1.5-litre four-cylinder diesel - both produce 89bhp. A naturally-aspirated 75bhp 1.0-litre will arrive later on, while we expect more powerful variants of both turbo units to arrive later in the year. No efficiency or performance figures have been released yet, but Nissan told us on our pre-production drive that the petrol turbo will deliver an average of 53.5mpg. 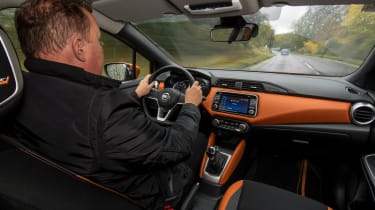 Don’t rule out the possibility of a hybrid given the Renault-Nissan Alliance’s push for alternative power, and there’s also potential for Nissan to give the Micra to its Nismo department for a spicier Micra with up to 190bhp.

Welcome to our Paris Motor Show hub page. Scroll down for all our Paris content...
Nissan Micra review 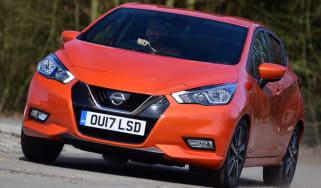