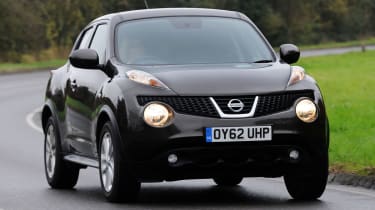 The Juke has an alternative appeal here, and the Shiro model offers the most equipment in this test, while its keen engine is stronger than the Mokka’s. Poor refinement and a thumping ride make it ill-suited to longer journeys, though. And the cabin is simply not spacious enough.

Gaining an advantage is always satisfying, so Nissan must be ecstatic watching rivals scramble to release supermini crossovers to take on its own Juke. The quirky looks and keen pricing have clearly struck a chord with British buyers, and the car has become a common sight on our roads.

But despite this new-found familiarity, the unique ‘frog-eye’ design means the Juke still looks like nothing else on the road.

The twin sets of headlights are separated by the wide dimpled grille, while at the back the curving tail-lamps neatly link the sloping roofline with the bulbous rear arches. The Acenta model in our pictures gets 17-inch wheels, but the Shiro trim we tested uses a more intricate alloy design with a striking two-tone pattern. However, while the Juke is certainly distinctive, it’s far from stylish, and the Vauxhall Mokka edges ahead here.

The new car presses home its advantage inside, as it feels less cramped and car-like than the Nissan. The interior plastics are hard and everything feels flimsier than it does in the Mokka. There are some nice touches, though, such as the 370Z-style cowled dials and the backlit centre console, which can instantly switch to display either the climate controls or trip computer info.

The Shiro model also comes with a standard kit list that should embarrass both its rivals. Touchscreen sat-nav, full leather trim with contrasting white stitching, heated seats and keyless entry are all included in the asking price. You would need to spend at least £2,000 on options to equip either the Countryman or the Mokka to the same high level.

Nissan is able to offer this keen value for money because the Juke is more compact than its rivals here. As an urban runabout it’s fine for space, but the narrow rear doors and cramped cabin mean the rear seats are better suited to children than adults. The boot is also small, at 251 litres, although a standard split/fold rear bench enhances practicality.

This lack of space means the Nissan isn’t as useful as its rivals on longer trips, but its size did come in handy in our performance tests. As the smallest and lightest car here, the Juke feels better suited to its 1.6-litre petrol engine, and the throttle responds quicker than the Mokka’s – allowing it to pull hard in-gear and beat the much shorter-geared MINI.

The vague steering and short-throw five- speed gearbox feel tuned to suit city driving, and on open roads the Juke shows a worrying lack of composure, skipping over larger bumps and leaning heavily through tighter turns. Cabin refinement is also really poor, and a lack of grip means the Nissan is not as reassuring as the Mokka.

Our Shiro is fitted with stop-start and costs a little more than its rivals, but with the lowest CO2 output it should be cheaper to run. The Nissan has also scored very highly in our annual Driver Power survey, where it finished fourth this year. The Juke has struggled to make its mark in the past – is it now ready to shine at last?