Late arrival to class faces a fight to establish itself 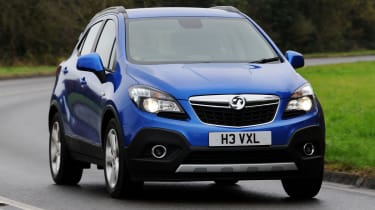 Capable rather than exceptional, the Mokka will boost sales for Vauxhall. But it doesn’t really bring anything new or innovative to this class, while the petrol engine is breathless and thirsty. We look forward to driving the diesel and 4x4 models to see if they’re stronger choices.

Vauxhall faces a daunting task with the launch of its new compact crossover. The brand rediscovered some of its form in the hot hatch class with the Astra VXR, but the Mokka is up against a talented list of rivals that all have a head start in this sector.

However, it gets off to a confident start in this test courtesy of its sturdy, rugged styling. At the front, the Griffin badge is set proudly in a wide chrome bar across the grille, and as the Vauxhall is longer, taller and wider than the Juke, it looks more substantial on the road.

Wide arches are filled by standard 18-inch alloys, and all the usual SUV design cues make an appearance, including protective plastic cladding around the body, built-in roof rails and a smart set of front and rear skid plates. Bright colours such as the Borocay Blue of our test car show the design at its best. And while it’s more generic than the Juke, the Mokka’s likely to appeal to a broader range of buyers.

Inside, this conservative approach continues, but the first impressions are good. Although the steering wheel and dials will be familiar to Astra owners, the centre console is smart and the switchgear all feels well made. Plastic inserts in the doors give the dashboard a ‘wraparound’ effect and the upright driving position offers an excellent view of the road.

Getting comfortable behind the wheel is easy with rake and reach adjustment. And our mid-range Mokka Exclusiv test car is well equipped, with a DAB radio, climate control, automatic wipers and lights with high-beam assist, and front and rear parking sensors.

There are some interior niggles, though. The cloth pattern seats, for example, look and feel cheap, and while there are two gloveboxes, neither is big enough to fit a basic road map. Yet despite these gripes, practicality is actually one of the Mokka’s greatest strengths. At over 4.2 metres long, it’s almost the same size as the Nissan Qashqai, so there is easily enough head and legroom for even taller adults in the back.

Open the tailgate, and the 362-litre boot is bigger than those of the other cars here. If you fold down the 60:40 split seats, this opens out to an even more impressive 1,372 litres. That means the Mokka can carry 542 litres extra luggage on board than the smaller Juke.

Still, this added flexibility comes at a price, as the bulky Vauxhall is 88kg heavier than the Nissan and its 1.6-litre engine produces less power and torque than either of its rivals.

At the track, this translated into a sluggish 0-60mph sprint time of 11.6 seconds, which was nearly a second slower than the lighter Juke. The Mokka was also much slower in-gear, and this lack of grunt means the engine has to be worked harder to keep up with other traffic. Once the revs climb above 4,000rpm, engine noise becomes very intrusive and the lack of a sixth gear means progress on the motorway is noisy.

The lacklustre engine is made all the more disappointing by the fact that in other areas, the Mokka is miles ahead of the Juke. After receiving some negative press following the European launch, Vauxhall UK has tuned the chassis to meet the unique demands of British roads, adding weight to the steering and tweaking the dampers to soften the ride. As a result, the Mokka feels more composed than the Juke in corners and grips better, too.

The ride is still quite firm for a family car, but it never thuds or jolts like the Nissan. The brakes bite reassuringly hard and we recorded short stopping distances even in slippery conditions. The long-throw gearbox is nicely weighted, too, but the steering feels artificial compared to the MINI.

It’s capable rather than exciting to drive – yet its biggest problem may be how hard it hits you in the pocket. The Mokka holds on to just 36 per cent of its value after three years – much less than its rivals – and has the highest running costs, too.

An emissions figure of 153g/km puts it two tax bands higher than the MINI and test fuel economy of just 26.4mpg tells its own story. The Mokka is more sensible and less flashy than many of its competitors, but the outdated powertrain may have limited its chances in this test. Can it still come through to win?