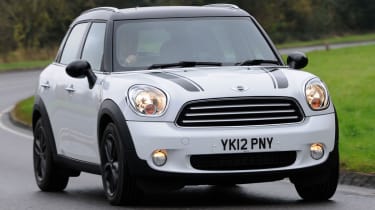 Trademark handling poise and refinement, plus a premium image, help take the MINI to victory. This Cooper rode surprisingly well on its small wheels, and provided nearly as much space as the Mokka, despite its car-like dimensions. Pricey options are offset by rock-solid residuals.

It's fair to say that the MINI Countryman has been given a mixed reception at Auto Express. With its firm suspension and odd styling, it has struggled to impress in previous tests, yet consistently strong sales have shown that the decision to supersize the MINI has paid off. The Countryman is about to be revised, too, so this could be its last chance to score a road test win in its current form.

However, it gets off to a shaky start, as the styling remains controversial. The car in our pictures was fitted with black alloys, extra chrome trim and a striped bonnet, but the Cooper we tested has to make do with 16-inch wheels, and even basic kit like front foglights is an optional extra. There’s more scope for personalisation than on the Mokka, though, and the lure of a more upmarket badge could be enough to sway some buyers.

Inside, the familiar retro MINI theme sees the Countryman use the large central speedo, pod-like rev counter and round air vents of the standard hatchback.

Previously, we’ve criticised the car for its below-par build quality, but this model felt sturdier and much better finished than both its rivals. Frustrating niggles such as the window switches being blocked by thegearknob will be fixed on the facelifted car, which will also get revised trim inserts and wider side armrests. Prices will remain unchanged for the updated model, but even so this Cooper’s cabin feels spartan compared to the lavish Juke Shiro. And while you can add creature comforts by opting for the Chili pack, it jacks up the price by £2,595.

At least the MINI does offer a lot of interior space as standard, and the sliding rear bench and comfortable seats give it an edge over the similarly sized Mokka. The Countryman has the longest wheelbase of the three, so although occupants sit low to the ground, the room inside is more than adequate and the 350-litre boot is big enough for most family outings.

As you might expect from a brand backed by the engineering might of BMW, the MINI is head and shoulders above its rivals to drive. The suspension is firm yet composed and the Countryman glides overs ruts that trip up both the Mokka and the Juke.

It has more grip, too, and feels nimble and poised when faced with a challenging series of corners. The steering provides a decent amount of feedback, which allows you to place the car with greater confidence, and the perfect pedal positioning and snappy gearshift mean the Countryman is almost as satisfying to drive as the hatch.

The tall sixth gear ratio ensures the MINI is also by far the most refined car in this test, and the 120bhp engine spins well below 3,000rpm when cruising along the motorway at 70mph.

This dynamic polish puts the Countryman in pole position in this test and glancing at the numbers only confirms its superiority. The ‘tlc’ servicing pack covers the first five years of ownership for just £249 and, like all MINIs, the Countryman retains its value extremely well, making the higher prices easier to bear. The smooth stop-start system and well spaced ratios should mean the MINI returns better everyday economy as well – so it looks odds-on to record its first test victory.