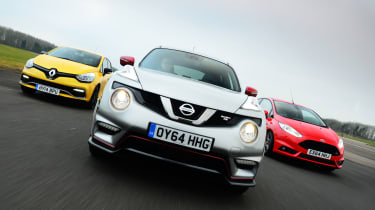 The traditional hot hatchback formula has changed considerably over the past few years. High-revving, naturally aspirated engines have been getting the chop in favour of smaller, turbocharged units designed to help save the planet – and your wallet.

This change has coincided with the growth of the compact crossover and, as a result, there’s now a new class of small, performance-focused machinery emerging, combining power with practicality and the dash of extra character that a supermini-SUV brings.

Chief among these new challengers is the Nissan Juke Nismo RS. Boasting a tuned 215bhp version of the regular car’s 1.6-litre turbocharged engine, it’s spoiling for a fight, offering an alternative take on usable, fast and affordable options in the form of the Ford Fiesta ST and Renault Clio RS. The question is, can the Juke deliver similar driving thrills?

Follow the links above to read individual reviews, and scroll down to find out which hot hatch comes out on top... 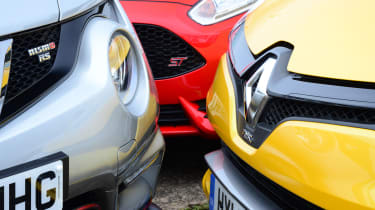 Renaultsport has a rich legacy of tuning everyday hatchbacks, taking Renault’s regular offerings and spicing them up with more power and tweaked suspension.

Founded in 1976, the French tuning arm takes building hot hatches so seriously that it even separates the production line for its most potent vehicles, with modern RS products being screwed together in a different factory in Dieppe, northern France. 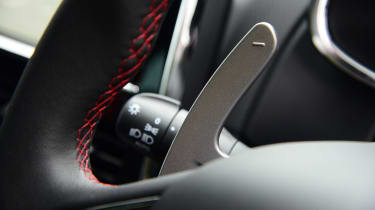 With close links to Renault’s motorsport activities, there’s plenty of F1-inspired technology included on its cars, such as the current Clio RS’s front blade, paddleshift gearbox and diffuser-style rear bumper.

By comparison, Ford’s ST boot badge is much younger. It stands for ‘Sports Technology’ and was originally conceived as a sub-brand to sit underneath the company’s hardcore RS models. 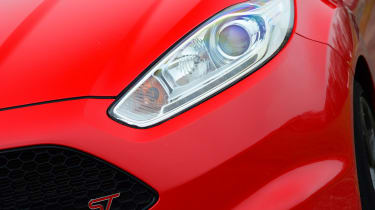 Now, with Ford uniting all of its hot road car operations under one roof – called ‘Ford Performance’ – ST is considered the lesser of three technology groups. It means we could see an even faster Fiesta RS featuring four-wheel drive and more power in the future.

Although the Nismo brand has a limited history in Europe, it’s been around for a while in Japan. Nissan Motorsports (hence Nismo) was started in the mid eighties and originally built race cars – only later did it branch out into tuning road models. 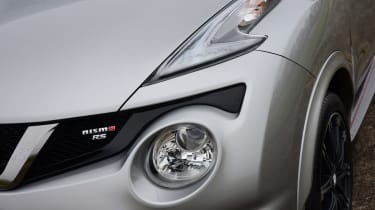 However, with increasing demand for added performance and style, Nissan has remarketed the Nismo brand as its range-topping performance line-up. 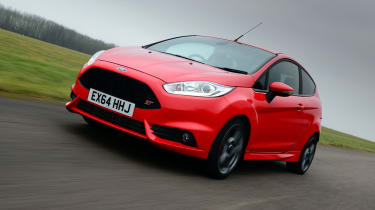 The way the Fiesta ST drives is enough to win this test alone, but the cheapest price tag here and generous standard kit make it an easy victory. Its explosive performance and tenacious chassis are superb, yet the fuel economy is acceptable and residual values are brilliant. The Ford shines brightest as a performance car and is the most civilised on the road, too. 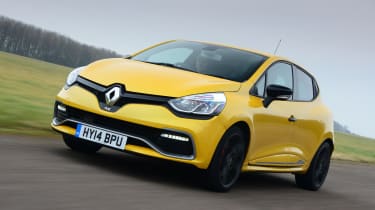 In this company, the Clio RS feels flat. Its engine doesn’t deliver the highs of the Ford or the Nissan, and the lack of a manual box adds a filter between man and machine – frustrating in a hot hatch. Even with the optional Cup pack, it can’t match the Fiesta ST’s grip and poise – although it feels more planted than the occasionally wayward Juke. It’s also the most practical car here. 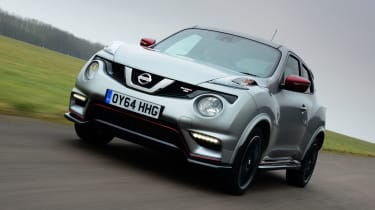 Despite its sporting intentions, the Juke Nismo RS can’t quite compete with this pair of performance-focused superminis. The updates over the previous version have brought an improvement, but compared to the Ford and Renault, it feels synthetic and a bit contrived. This unconventional hot hatch’s appeal is in its blend of speed, style and everyday usability.