Electric car goes in for its first service. So what does it involve? 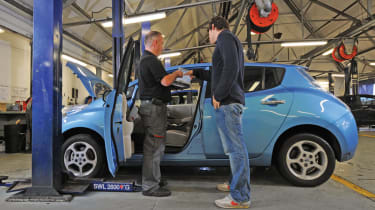 After nearly a year on the fleet, our Nissan Leaf was due for its first service. Usually we wouldn’t be too interested in what goes on in a workshop – but when running an electric car, it’s a lot more intriguing.

The Nissan requires a service every year or 18,000 miles. Given its urban diet and the relative scarcity of charging bays outside the capital, we were never going to clock up that sort of mileage. But with the months flying by, we visited WLMG Nissan in Mill Hill, north London, to ensure things were shipshape.

So what exactly happens to an electric car when it gets a service? Well, as you can see from the main picture, not much! The job is mainly done with a laptop – there’s not a socket set in sight. Because the Leaf doesn’t have many oily bits, technicians check its health by plugging into its on-board computer.

Thankfully no fault codes popped up, indicating that OY11 PRV’s batteries, electric motor, charger and high-voltage cables were all in first-class condition – as you’d probably expect from a car with just under 5,000 miles on the clock. “It’s a simple job to make sure everything’s working okay,” technician Richard Godley explained. “At this point in the Leaf’s life, we don’t even need to do any software updates.”

WLMG also checked the car’s systems, gave the brakes and tyres the once over and topped up any fluids. “There’s not really much more to do,” added Richard.

As a London dealer, WLMG has serviced quite a few Leafs, but Richard told us he’d never had one with a problem. “The only issue I’ve heard of was a car that couldn’t be driven off the ship at the docks, as it had an issue with its gear selector,” he said. “That’s it.”

Thankfully, my Leaf hasn’t suffered with such ailments, and the check-up proved it. Getting the Nissan through its first service cost me only £123.10, too, which is about £100 less than the average first service for a Juke or Qashqai.

This is because the Leaf doesn’t have the huge number of consumable parts a conventional petrol or diesel car has – there’s no oil, or oil and air filters, to replace. Apart from the price of labour, the only ‘part’ our Nissan needed was a top-up of windscreen washer fluid.

The service also included a full valet, which meant I left WLMG in a shiny car, although the bodywork and cabin are starting to show signs of wear. Dirt stands out on the beige cloth seats, and they’re easy to scuff, too.

Annoyingly, an anonymous driver has also scraped the front end of the Leaf in a car park, and there’s also a small ding on the bonnet. It’s as if someone dropped the charging plug on to the front of the body by accident.

Talking of plugs, the standard plug – which runs from the car to a conventional socket – has been upgraded to a more hardwearing Duraplug. Bizarrely, this work was carried out by a man from British Gas, as the utility company has the contract for installing home chargers and other odd jobs. Life with an electric car – it’s certainly never dull...

“My five-mile commute is a relaxing affair in the Leaf, but during a 50-mile trip to Heathrow I couldn’t help but stress about the range.”Luke Madden, Web reporter

“A proper network of fast chargers is what the Leaf really needs. If you can pull up to a charger and top up in a short time, what more do you need?”Mad_Lad, via www.autoexpress.co.uk