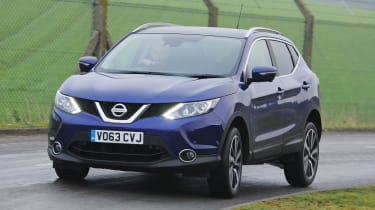 The new Nissan Qashqai diesel plays it safe, but fans of the old model won’t be left disappointed by its replacement. The 1.5 and 1.6 dCi models set new class standards for efficiency and safety, while passenger comfort and practicality are as strong as ever. The driving experience has matured, and while it’s still not as fun as a Skoda Yeti, as an all-round proposition the Nissan is going to be very hard to beat.

The Nissan Qashqai is the car that kick started the trend for rugged crossovers, but after six years and countless sales, Nissan has launched an all-new version. Here we test the diesel version, with two engines available – the 1.5 dCi and the 1.6 dCi. The Nissan Qashqai diesel is available in five trim levels: Visia, Acenta, Acenta Premium, Tekna and the Premier Launch Edition.

To help it build on the success of the current model, Nissan has increased the overall size, packed it full of an impressive array of new gadgets, and engineered it be cleaner and also more refined than ever before. So have they succeeded?

The front-wheel drive 1.5-litre dCi diesel that we’re testing here is tipped to be the bestseller in the UK and thanks to a stop/start system, crash diet and refined engine technology it emits just 99g/km of CO2 and returns a staggering official economy of 74.3mpg. That makes it by far the most efficient soft roader on the market, and the exemption from road tax and low benefit-in-kind rate will tempt both private and company buyers keen to reduce their running costs.

Yet despite the impressive efficiency gains, the new Qashqai never feels like it’s been hampered in performance terms. On paper the 0-62mph sprint time of 12.4 seconds is unlikely to set the world alight, but during everyday driving the 260Nm torque output gives a sharp throttle response, and the nicely spread ratios in the manual gearbox mean it’s easy to keep in the power band.

A variety of clever active systems designed to aid the handling have been added to the new model. The torque vectoring ‘Active Trace Control’ system brakes the front wheels to reduce understeer in corners, an Active Engine Brake feature ensures that there’s no sudden jerkiness when you step off the throttle.

There’s even a system that cancels out body roll by gently applying the brakes to either the front or rear wheels. In practice, the Qashqai diesel now feels a lot more mature to drive, with better high-speed refinement, and a grippy, neutral handling balance that inspires plenty of driver confidence. The light controls and high-driving position also mean that it’s perfectly comfortable in town too.

Inside, the Nissan Qashqai has enough room to just about seat five adults in comfort, with no raised transmission tunnel to encroach on rear legroom. The 430-litre boot has grown by just 20 litres compared to its predecessor, but a handy false floor that acts a boot divider, folding rear bench and 1,503-litre maximum boot space all help to strengthen the Nissan’s impressive practical abilities.

The cabin quality has also taken a leap forward over the old car, with soft-touch materials throughout, and smarter switchgear. The top-spec Tekna model looks expensive, but gets an extensive list of standard kit that includes everything from DAB radio to all-round 360 degree parking cameras and heated leather seats.

Safety kit is equally generous, with every model from the Acenta Premium trim upwards benefitting from the ‘Safety Shield’ suite of systems. This includes lane departure warning, high beam assist, automatic braking at low speeds to avoid collisions and traffic sign recognition – and is available as an option for just £450.