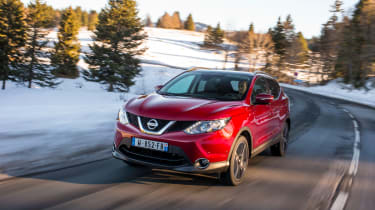 The new Nissan Qashqai might not quite be the groundbreaker its predecessor was, but it’s gone straight to the top of the class. Its combination of comfort, usable space, quality and tech is unbeatable, while it has solid, secure driving characteristics. We like this CVT auto, too – an example of the clever thinking that makes the Qashqai such a great car.

The Nissan Qashqai automatic is likely to be a popular version of the all-new compact SUV, and it's available on three different specifications. While the entry-level Visia and top-spec Premier Launch Edition models are only available in manual form, the mid-spec Acenta, Acenta Premium and high-sped Tekna are available with a new CVT automatic gearbox.

More than 1.5million Nissan Qashqai models have already rolled out of the Sunderland production plant, with around 8,000 UK jobs involved. So the new 2014 model is not only a vital car for Nissan, it’s important for the whole of Britain.

It’s also the car that kicked off the small SUV/crossover class, and without it we might not have seen the likes of the Skoda Yeti, Peugeot 3008, Kia Sportage and Ford Kuga. Or even the smaller Nissan Juke, also built in the UK.

From launch, you can choose from either 1.5 and 1.6-litre diesels or a 1.2-litre petrol, but here we concentrate on the 1.6-litre dCi two-wheel drive – a 4x4 is also available – with its Xtronic CVT automatic gearbox.

It’s fair to say CVT gearboxes have had a bad press, with their pulleys and cones system, rather than a traditional gearset.

While CVTs have always been ultra-efficient, the characteristic of engine revs rising and staying at the optimum point is alien to most drivers used to revs rising, dropping, then rising again in a standard auto or manual box.

The whining engine noise and rubber band feel isn’t popular, so Nissan has worked hard to engineer in steps that feel like gearchanges from a double clutch gearbox. So there’s no more whining and no more rubber band feel, but the same efficiency you’re supposed to get in a CVT.

And it works – this is one of the nicest CVT boxes we’ve tried. It’s smooth, quick to react and with the artificial steps doing the job of eliminating the engine whining well. In everyday driving it’s a delight, and even when pushing harder and using the gearlever to shift manually through the fake gears, it’s fun.

Replacing an iconic car can’t be taken lightly, and Nissan started at the right place: talking to existing customers. They said they wanted more quality, more kit and more space. So that’s exactly what the company has given them in the new Qashqai.

The look is evolutionary, with a sharp front end featuring LED lights and the familiar, muscular wheelarches. It’s longer, lower and wider than the current car, so there’s more legroom all round and more headroom, as you sit lower in the car.

Quality has taken a major step forward inside, thanks to a 30 per cent cost saving achieved by using new platform architecture shared across the Nissan/Renault Alliance. The spare cash has been spent producing an upmarket cabin with lovely soft-touch plastics across the dashboard.

Nissan has paid attention to the major touch points, making them as lavish as possible, although, as you might expect, some of the plastics lower down in the car aren’t quite as plush.

Then there’s the tech available on board, from the clever safety kit that Nissan says makes the Qashqai pretty close to an autonomous car, to the new levels of luxury and dynamic technology in the class.

Acceleration from 0-62mph at 10.7 seconds is only 0.2 seconds down on the manual car, while economy and emissions take a very slight tumble, too. However, this model still claims an impressive 62.8mpg average and 119g/km of CO2.

We’re looking forward to trying this gearbox with other engines, too. Not that there’s anything wrong with the 1.6 diesel, but we preferred the heavily revamped and slightly sweeter 1.5 dCi. Nissan will be working right up until first production of the car to improve the refinement of the 1.6.

Our top-spec Tekna model came with the full dynamic tech treatment, including Nissan’s Chassis Control. It has Active Engine Brake and Active Trace Control to maximise traction and balance through corners, and Active Ride Control, which uses the brakes to level off the body and improve ride comfort.

All that means the Qashqai rides nicely – there’s a degree of firmness, but body control is good and overall it’s very comfortable, even on the 19-inch alloys of our Tekna car.

The steering is nicely weighted, too, with good turn-in. Nissan wants all of its models to have a distinct feel, somewhere between the comfort of a VW and Ford’s sportiness. On this evidence, it’s struck a good balance.

This £27,495 Tekna model is a bit pricey, but is loaded with luxury. So there’s keyless entry and start, a self park system and advanced connectivity and infotainment kit.

It’s comfortable, too, with seats inspired by NASA thinking, while the TFT screen between the main dials makes using all the features a doddle.

More clever thinking has been applied to the 439-litre boot (59 litres more than in a VW Golf). There are two levels for the boot floor – at the upper level, it ensures a flat load area when the rear seats are folded. Plus, the parcel shelf can be hidden away cleverly and the floor splits up to provide partitions to stop your shopping rolling about. No stone, it seems, has been left unturned.