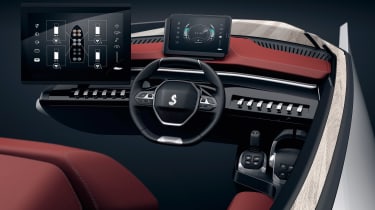 Peugeot has become the latest car manufacturer to apply its know-how to the nautical world, revealing a concept powerboat interior inspired by the firm’s i-Cockpit dashboard design.

Usually found in the firm’s latest SUVs, the Sea Drive Concept cockpit has been created through collaboration with boat maker Beneteau, and has been revealed at this year’s Nautic Paris Boat Show.

The steering wheel appears to have been lifted directly from any one of Peugeot’s latest models, while the i-Cockpit’s trademark ‘piano key’ switchgear is also present.

Alongside the obviously Peugeot inspired touches, a large 17-inch touchscreen display nestles to the left of the wheel. The screen uses technology developed by Beneteau and is the interface from which many of the ship’s settings are accessible. A smaller navigation display sits behind the steering wheel, and folds away when not needed. 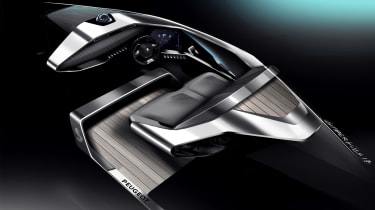 Peugeot’s influence over the cockpit is also seen in the fit and finish. The firm says that the interior makes use of materials lifted from GT trim level cars, with the same Nappa leather, copper coloured contrasting stitching, plus satin chrome trim accents.

A number of manufacturers have turned their hands to more nautical projects in recent times. Aston Martin partnered with Dutch yacht maker Quintessence in 2016 to produce the £1m AM37 powerboat, while Mercedes and Lexus revealed similar projects earlier this year.

Do you think any other carmakers could do a better job than Peugeot at creating a powerboat interior? Tell us your thoughts in the comments.