Peugeot's new family friendly Rifter van goes on sale in September, but prices are out now 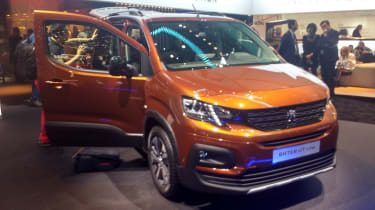 UK prices and specifications for the Peugeot Rifter have arrived, with the all-new Partner Tepee replacement go on sale in Britain on 3 September, priced from £19,650.

Based on a modified version of PSA’s EMP2 platform, it lines up alongside the new Citroen Berlingo Multispace and Vauxhall Combo Life, to complete a trio of van-based MPVs from the newly-formed alliance.

Like those other vans, the Rifter is largely an exercise in badge engineering, sharing the same underpinnings and overall form. Peugeot’s latest family face distinguishes it from the rest of the pack, however, while sportier looking GT-Line models will be available too. 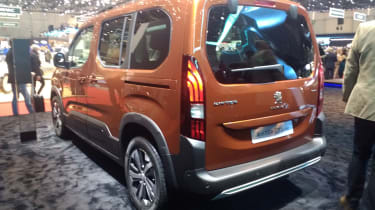 Like its two siblings, the Rifter will be available in two sizes. A ‘Standard’ wheelbase van sized up at 4.4 metres long, while the long-wheelbase ‘Long’ model stretches out to 4.75 metres. Five seats are standard, with seven-seat models arriving on the market next year. Shorter models will sport 775 litres of boot space with five seats in place, while cargo room in the Long model swells up to 1,050 litres.

In the cabin the overall dashboard and interior layout is just as you’ll find in both the Citroen and the Vauxhall, meaning a new, cleaner design with wide horizontal air vents, a wide central bin beneath the gearstick, and a tablet infotainment screen on top range models. The Peugeot does sport two slight differences, however – a trademark, small steering wheel sits ahead of an i-Cockpit style instrument panel.

British buyers won't be offered the entry level 74bhp diesel option. Instead, the 1.5-litre BlueHDi unit here is only available with 128bhp and equipped with a manual gearbox as standard, though and eight-speed automatic makes the options list.

Extra convenience equipment is found on the Allure model. Going for this spec adds electric rear windows, rear parking sensors, rear tray tables, and an eight-inch touchscreen infotainment system with Apple CarPlay, Android Auto and voice recognition. It gets a dose of extra style too, with LED daytime running lights and 16-inch alloy wheels. £20,920 is the price of the regular Rifter Allure, with the Long version priced from £22,620. 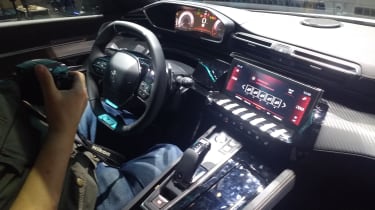 The range topper is badged GT Line, which is priced from £22,570 and £24,270 for regular and long-wheelbase versions respectively. It gets a handful of GT Line styling tweaks and rides on 17-inch alloy wheels, while extra tech and equipment includes an updated infotainment unit with satellite navigation, plus automatic dual zone climate control, power folding mirrors and a panoramic glass roof. Peugeot Connect SOS roadside assistance is also included.

Regardless of which trim you choose, all cars are painted white by default. The Active model can be had in black or red for a little extra, while Allure and GT Line get a palette of five metallic options for buyers to choose from.

Alongside the debut of the production car at this year's Geneva Motor Show, Peugeot revealed a more rugged version called the Rifter 4X4 Concept. Said to be "built for adventure on all types of terrain", the 4X4 Concept gets all-wheel drive, specific off-road tyres and 80mm of extra ground clearance. On the roof there's an Overland tent, while an electric bicycle is mounted on the back. Just a concept car for now, there is no hint as to whether the 4X4 will make production at a later date.

Take a look at the Rifter's sister models - the Citroen Berlingo Multispace and Vauxhall Combo Life...