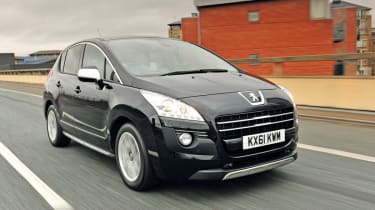 The 3008 HYbrid4 stands out for a number of reasons. It’s the only hybrid crossover and, for now, the only diesel-electric car on sale. Despite the pioneering powertrain, it all works smoothly and the 3008’s practicality and driving dynamics are left mostly intact. With its sub 100g/km emissions, improved ride and lower price, the 99g/km model is the one to go for – and would be worth an extra star.

In terms of numbers the Peugeot 3008 HYbrid4 has it all: 200bhp, four-wheel drive, CO2 emissions as low as 99g/km and economy of over 70mpg. But the one figure that matters most – the £26,995 starting price – is a little harder to swallow. We drove the car in the UK for the first time to find out if it can justify the cost.
All models are powered by the same combination of a 163bhp 2.0-litre diesel engine and a 37bhp electric motor, but CO2 emissions vary across the range. Our HYbrid4 104g model emits 104g/km as the name suggests. A 99g/km version is also available, with the only exterior difference being 16-inch alloys instead of the 17-inch wheels on our car. The smaller rims affect economy, too, boosting it from 70.4mpg to 74.3mpg.

The electric motor is capable of propelling the 3008 for around three miles on battery power alone, and in stop-start traffic it does the majority of the work. When the engine does kick in, the transition is seamless, but the rough engine note means it’s more noticeable than it would be in a petrol-electric model.
When it needs it, the HYbrid4 has an impressive turn of speed and the electric motor and diesel engine work together to take it from 0-62mph in 8.5 seconds.
Thankfully, the six-speed auto is transformed in this 3008. The box is jerky and unresponsive elsewhere in the Peugeot line-up, but here it works well because the electric motor delivers power to the wheels during gearchanges.
With the hi-tech powertrain and batteries on board, the HYbrid4 weighs around 100kg more than a regular diesel 3008 and that has affected the way it drives. The suspension feels firmer and bumps in the road send more of a thud into the cabin than they do in a standard car. The 3008 isn’t the most agile car anyway, but the extra weight makes it even more cumbersome through corners.
Otherwise, the car’s practical layout and design remain almost intact. There’s enough space in the back for adults and the boot has a maximum capacity of 1,501 litres – only 103 litres less than a conventionally powered 3008.
The HYbrid4 is unique in this class, but buyers will have to think hard about whether it’s worth the extra cost. This top-spec model is £28,495 – that’s £4,500 more than the priciest 3008 diesel.
Share this on TwitterShare this on FacebookEmail