Peugeot’s 308 gains a series of mid-life revisions and a new engine, but is it a better car as a result? 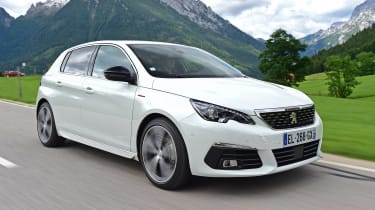 The revised Peugeot 308 hasn’t leapt to the top of its class as a result of these mid-life updates. But it has been boosted in a few key areas, with a more comprehensive array of safety tech, a more desirable look, and greater efficiency. It’s a pity Peugeot couldn't bring more interior influences from its latest 3008 SUV, but this is still a good to drive, comfortable and frugal family hatchback.

When a manufacturer launches an all-new car, it can often draw attention away from its established siblings. That’s exactly what happened with Peugeot; the classy and tech-filled 3008 SUV was such a revelation that it won our sister title Carbuyer’s Car of the Year award for 2017. But for the first time it also made the brand’s 308 hatchback look a little behind the times.

To bring it up to date, and to give it a fighting chance against newer rivals like the Vauxhall Astra and Renault Megane, Peugeot has given the 308 a round of mid-life revisions. Before customer cars arrive in the UK in September, we’ve sampled the updated model on German roads to see if it can take the fight to the best small family cars on the market.

Exterior changes focus on the front end, with a more prominent grille, re-shaped projector headlights and standard-fit LED daytime running lights. There’s a new bumper, too, with the changes all aiming bring the 308's look into line with the French carmaker’s successful SUV range. The ‘claw effect’ rear lights are now standard fitment – and for safety’s sake now stay on whether it’s day or night. New wheel designs complete the revisions. 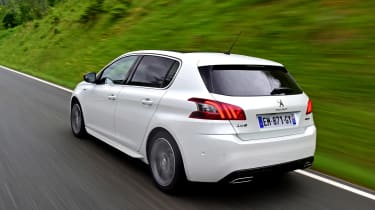 Step inside and you’ll have to search long and hard to spot any changes. New upholstery features on lower level cars, while the 9.7-inch touchscreen gets fresh graphics, the inclusion of TomTom Live services and extra smartphone connectivity in the form of Apple CarPlay and Android Auto. But the design is identical; it’s still attractive and the materials are plush, but it’s a shame Peugeot didn’t see fit to install the new 3008’s excellent digital cockpit and more intuitive toggle switchgear.

Ergonomics are still an issue for some, too. Drivers of certain sizes and shapes will find it difficult to find a comfortable driving position where the small steering wheel doesn’t obscure the dials. And despite new pinch-to-zoom functionality for the sat-nav, the central touchscreen still isn’t particularly easy to operate on the move. Changing the temperature can be fiddly, due to the fact the virtual buttons are squirrelled away in a sub-menu.

Still, there’s no arguing with the equipment tally on our GT-Line model, which gets sportier styling details and 18-inch alloys, a panoramic glass roof, full-LED headlights and a reversing camera all thrown in as standard. 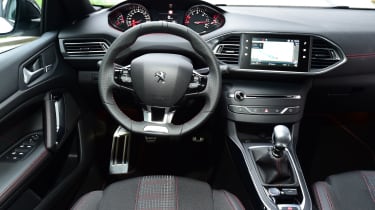 There are big advances on the safety front, too, albeit with most of the key systems only featuring on the options list. A more advanced autonomous braking system can operate at speeds of up to 87mph, while the adaptive cruise control can now take the strain in low-speed traffic. Lane departure assist and traffic sign recognition can also be specced, too.

Peugeot has made no significant changes to the suspension, steering or brakes, claiming the car is already very competitive in this area. New or revised engines are available, though – including the new 1.5-litre BlueHDI diesel that we’re driving here.

The four-cylinder unit will initially launch alongside the existing 1.6, before that motor is phased out at the end of the year. It features Selective Catalytic Reduction with urea treatment to reduce particulate and NOx emissions, while a five per cent improvement over the 1.6's already excellent claimed efficiency stats is also expected. Peugeot hasn’t received homologation figures yet, however. There’s no hybrid tech here, so all cars will be subject to the flat-rate £140 annual fee for road tax.

With a mere 10bhp advantage over the 1.6 (and an identical torque figure), performance feels largely similar. There’s plenty of mid-range punch and strong flexibility for a motor of this size, and only the long-throw and sometimes obstructive manual gearshift lets the package down.

It unsurprisingly feels as planted in the bends as before, with strong front-end grip levels, quick steering and good body control. An Astra is a bit more engaging and a VW Golf offers a more supple ride, but the 308 is still reasonably pliant over bumps in spite of our model’s 18-inch wheels. 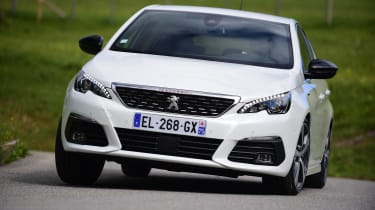 Improvements have been made to refinement, though. It isn’t significantly quieter on the road than the 1.6, but that was never intrusive anyway and the 1.5 emits even less vibration through the controls at low speeds. We reckon it’s the sweet spot in the diesel range, although the excellent PureTech petrols are still a great alternative for those not fussed about long distance fuel economy.

With prices across the range remaining broadly the same as before (and some models actually working out a bit cheaper) Peugeot’s hatch is still a competitive, if not quite class-leading, family hatchback.