The Peugeot 508 SW goes big on style and desirability, but is that enough to woo family car buyers? We test it in GT Line trim to find out 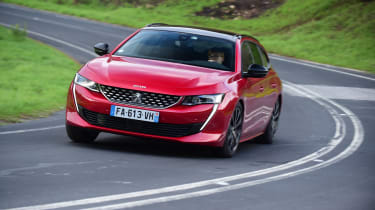 Given its average boot size, the 508 SW is a car you’ll have to purchase with your heart rather than your head. If practicality is the exact reason why you’re thinking of buying an estate, there are much more capacious rivals out there. However, those eye-catching looks do appeal and the SW has a raft of abilities strong enough to convince us that Peugeot has produced another car worthy of your attention. Just like the 508 Saloon, it feels plush enough to be a proper flagship for the brand.

Peugeot has made no secret of the fact that the latest 508 is a car it’s using to win hearts and minds. The mainstream D-segment saloon market is in dire need of a shot in the arm, as more and more families turn away from the traditional low-slung three-box models in favour of a crossover market now packed with a staggering amount of choice.

When we drove the new 508 earlier this year, we found it to be a highly convincing saloon verging on proper premium territory. And arriving soon in Europe and in May next year in Britain is the estate version: the new 508 SW. It could actually play out to be the more important member of the 508 line-up, given that the sales split between D-segment saloons and estates in Europe is 60:40 in favour of wagons.

UK prices and specs have not yet been finalised, but we’re told it’ll command around a £1,600 premium over the saloon when it lands in British Peugeot showrooms late next spring. For the money, buyers get to keep much of the 508 saloon’s style, with the larger boot elegantly incorporated into the car’s muscular rear end. 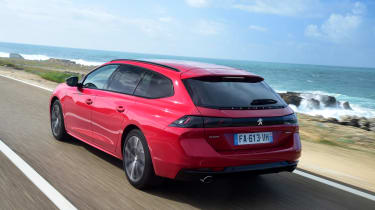 Cargo space leaps up from the saloon’s 487 litres to 530 litres, while the load bay itself is a little longer too. Fold the rear seats flat – easily done with a prod of the ‘Magic Flat’ button – and total carrying capacity stands at 1,780 litres.

However, those figures are far from class leading, and the boot is 30 litres down on the old version of the car. Compared with the most practical options in the class – the Volkswagen Passat Estate and the Skoda Superb Estate – the 508 SW’s hand isn’t the strongest. Those cars get 650-litre and 660-litre boots respectively, with 1,950 litres on hand with the seats down in the Skoda. The Peugeot is firmly a midfield runner in this area, then, just behind the Vauxhall Insignia Sports Tourer’s 560-litre capacity but ahead of the posher Audi A4 Avant. Ultimately, the average boot size is the price you’ll pay for the 508 SW’s impressively sleek styling.

The cabin feels exactly as it does on the 508 Saloon, with the exception of a smidgen more headroom in the rear. Up front, a sharply designed dashboard and centre console are home to a crystal-clear 10-inch HD touchscreen underpinned by Peugeot’s smart-looking and familiar ‘piano key’ style switchgear. Models equipped with the EAT8 eight-speed automatic transmission get a joystick-style gear lever.

On high-trim cars like the GT-Line model we tested, the level of standard equipment is strong, and the cabin is very nice place to be too, using a combination of upmarket woods, premium plastics and soft leather upholstery. The 508 SW’s interior feels more than smart enough in the company of more upmarket rivals, such as the Mercedes C-Class estate.

The instruments still use Peugeot’s i-Cockpit layout, and while it’s a neat looking solution, it’s not the most practical set-up. For some drivers, a comfortable seating and steering wheel position will still mean that the top of the wheels blocks off some of the information on the digital instrument panel.

The steering wheel itself feels remarkably small by modern standards, and the steering system itself is short on any real road feel and suffers from some slightly inconsistent weighting that is only enhanced when you toggle the 508 SW into Sport mode. However, the car’s nose still feels darty and light – aided by that small wheel - and by and large it’s a front-wheel-drive estate that’s fun to drive, feeling fairly agile and with a front axle you can aim at corners with confidence. 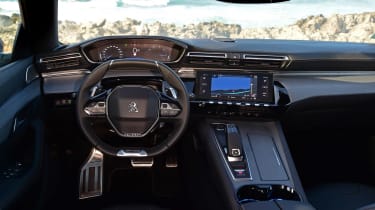 Keep it in Comfort mode and by and large the ride quality is pleasant too, being supple but without unnerving amounts of body roll. The effect of larger wheels and low-profile tyres can creep in occasionally on poorer surfaces, though.

Petrol power is likely to prove more popular than diesel, with the 178bhp PureTech 180 unit predicted to be the best seller. It’s not the most exciting engine in the world but it’s a good all-rounder, with its reserves of 250Nm of torque found easily across the eight gear ratios, and engine noise kept at a respectable level at a cruise. Fuel economy stands at a decent 51.4mpg, homologated under the tougher new WLTP test.