Electrically assisted e-Kick urban scooter, designed to fit in the new Peugeot 3008 SUV, could be the perfect companion for city commuting 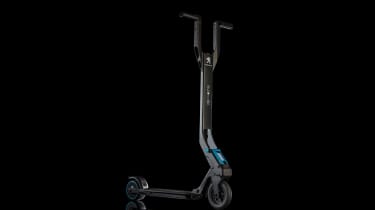 While the big news from Peugeot of late has been the launch of the new 3008, something rather smaller also made its debut carring the French marque's badge. The e-Kick is part of a collaboration between Peugeot and scooter manufacturers Micro Mobility, and it’s a battery-assisted urban runabout with up to 7.5 miles of range.

It’s specifically designed to accompany the new 3008 crossover SUV, and can be stored in a special docking station inside the crossover’s boot, charging up its battery on the go.

The e-Kick can reach speeds of up to 15mph thanks to its integrated lithium-ion battery and electric motor, which is cleverly integrated into the rear wheel. Smart features like regenerative braking make the most of the battery’s power, topping it up when the rider hits the footbrake. Still, using a regular power socket, Peugeot says the e-Kick will only take an hour to charge.

The e-Kick easily folds up for easy transportation, and can be rolled along on its front wheel if the owner doesn’t feel like carrying it. 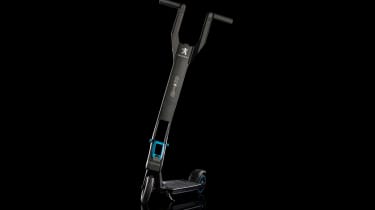 • The craziest car options ever

Peugeot has a strong record of producing alternatives to cars. The brand began as a bicycle manufacturer, and even today sells a range of two-wheeled products including pedal bikes and mopeds to accompany its trikes, vans, and passenger cars. The e-Kick is just another vehicle to add to this varied roster.

Unlike similar concepts – such as the Audi Q3 Connected Mobility, which offered an electrically-driven longboard, Peugeot insists the e-Kick previews an actual product which will go on sale later this year. However, there’s still a grey area regarding the legality of these products in the UK. They aren’t technically road-legal, but as a motorised vehicle they are also forbidden from using pavements. That doesn't leave you with too many options so the e-Kick is likely to remain a niche product.

Would you ride a scooter like this to beat the traffic? Let us know in the comments below...