Peugeot's Instinct concept has been fully revealed at the 2017 Geneva Motor Show, hinting at the French brand's future design 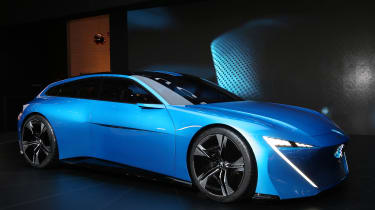 The Peugeot Instinct has been officially revealed at the 2017 Geneva Motor Show. The concept is designed to showcase not only a potential future look for the French manufacturer, but also the sort of connectivity that’s likely to be phased in along with autonomous vehicles.

The Instinct is a family-sized four-seat shooting brake, longer than a Peugeot 308 but slightly shorter than its estate version, the 308 SW. It also sits considerably lower than both of those vehicles. The concept is powered by a 297bhp plug-in hybrid system, based around a petrol engine and driving all four wheels - although Peugeot is being deliberately sketchy about the Instinct’s performance or efficiency, because these are not its key goals.

At the front, the show car reveals a new potential headlight signature for Peugeot, with ultra-slim headlights framed by strong angled vertical lines that double up as daytime running lights and animated indicators. The front grille is an intricate 3D-printed item, while the headlight units themselves contain cameras that work as part of the car’s autonomous technologies. 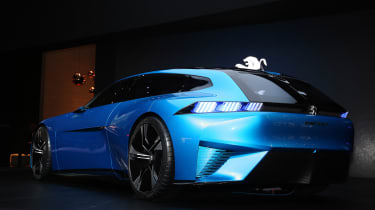 “We wanted to integrate the cameras as the eyes of the car, instead of having sensors all over the front of the vehicle,” said Matthias Hossann, Peugeot’s head of concept cars and advanced design. It’s conceivable that the look could be adopted by future Peugeots, since it could easily be scaled up or down the range.

Hossann said his team had worked closely with aerodynamicists to deliver an efficient shape without resorting to winglets. There are a couple of ‘active’ aero elements that kick in at around 55mph; the vertical front light elements slide forwards by about 60mm to help create front downforce, while a thin spoiler extends from the base of the rear glass to provide the same effect at the back. There’s also a scalloped-out section that feeds air through the car’s shoulder line. 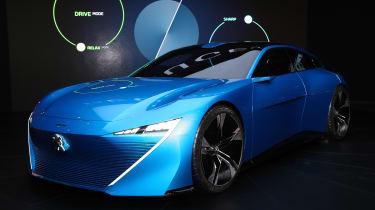 Inside, the four seats can move the angles of their bases and backs while not changing the position of their overall structures. And all four occupants have access to high-resolution displays; these include a configurable instrument panel for the driver, and a widescreen in front of the front-seat passenger.

The Instinct is designed to be driven as well as offering full (Level 5) autonomy. Its steering wheel is an extreme evolution of Peugeot’s i-Cockpit, while the concept’s petrol-electric plug-in hybrid powertrain can operate in a number of different modes, depending on how involved the driver wants to be.

In its most autonomous setting, the steering wheel folds forwards as the entire column moves away from the driver and slots into the fascia. Even with this setting, though, the user can specify how aggressively they want the autonomous systems to drive the car, or if they want it to hold back or overtake; these instructions can be issued using i-Device, a hand controller mounted at the bottom of the centre console.

The Instinct also shows how car users may choose to use the time freed up by autonomous technology. It hooks up to Samsung’s Artik Cloud, a service that supports the Internet of Things (IoT) - connectivity for everything from smartphones to fridges, fitness monitors and home thermostats. Peugeot is the first brand to collaborate with the Korean electronics giant on Artik Cloud integration. 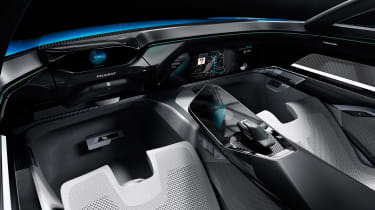 As as a result, the Instinct could be more aware of your lifestyle and preferences than cars currently on sale. It could carry on playing the music you were listening to in the house, for example, or suggest parking spots further from the office if you’ve fallen behind in your fitness regime.

Large touch screens in the centre tunnel allow occupants in the front and rear to access the system, and send instructions to other devices connected to the Artik Cloud; this could mean allowing someone to enter your house if they turn up while you’re still out, or adjusting the temperature while you’re on the way home. The set-up’s security is likely to be based on a mobile phone interface, possibly using fingerprint scanning tech.

Peugeot’s head of strategy, Aude Brille, said that the Instinct’s Level 5 autonomy means this is a vehicle that wouldn’t appear until 2025 at the earliest. However, Samsung’s Gilles Mazars, Director of Engineering for Artik Cloud, told us, “I cannot speak about the autonomous systems but the Internet of Things technology could happen tomorrow. We have been making good progress working with Peugeot on this and the system can use the car’s existing electronics infrastructure and its data connectivity.”

What do you think of the Peugeot Instinct concept? Let us know below...

Welcome to our Geneva Motor Show hub page, scroll down for all our Geneva content...
Peugeot launches official restoration service for heritage vehicles