Peugeot's Audi TT-rivaling RC-Z sports coupe has finally hit the road - and we've got behind the wheel for an exclusive first drive. 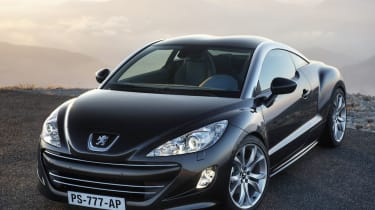 Let the celebrations begin! Peugeot has not just built a car that's great to look at, but is a great driver's car too. With class leading mid corner poise and stability, our diesel engined test car is both responsive to drive, and extremely quick with it. We have yet to test the car in the UK, but all the signs point to this car finally living up to the legend of the orginal 205GTI - something performance Peugeot fans car really celebrate in the firm's 200th year.

Let’s get straight to the point, Peugeot’s RC-Z is a revelation!

Smooth riding, with sweet handing, it’s the best driver’s car Peugeot has built since the 205GTI.

That's a big statement - yet even our entry level 2.0-litre diesel-engined car stunned us with its mid corner poise and stability. No mean feat on our twisting Spanish test route.

But before we get stuck into the detail of exactly how the Audi TT rivalling coupe has pulled off such a stunning feat, let’s deal with the looks.

Anyone who has spent the last two years watching Peugeot’s Motor Show appearances will have been well aware of the RC-Z’s shape. The coupe has been a near permanent presence over the last two and a half years. First shown as a concept in late 2007, the car was confirmed for production early in 2008, and revealed road going trim less than a year later.

With its distinctive double-bubble roof canopy and rear window, it also sports aluminium effect roof pillars, and has a bold, cab forward profile that instantly marks it out as a very different machine to its closest competition.

More importantly than that, the design offers the RC-Z a handcrafted feel, that looks more expensive than its £20,450 pricetag would suggest.

On the road, there’s really not much else to rival it for kerbside appeal, and though we felt some of the detailing lacks the upmarket finish of its German rivals, it’s a car you would never tire of looking at.

Inside, it’s a similar story. Our test car’s leather trimmed dash is neatly finished, with contrasting stitching and bright, jewel like instruments. The oversized analogue clock in the centre of a dash makes an overt statement on this car’s bold fashion credentials, while crome effect trim adds a dash of sparkle too.

But while everything in the drivers eye line looks good, we felt improvements could be made to the likes of the centre console, which is finished in hard, scratchy plastic. The same is true at the rear of the car, where some mouldings feel cheap and flimsy.

Some of this is forgiven when the diesel fires. The unit is smooth, and there’s none of the rough idle often associated with such powerplants.

In gear, acceleration is smooth, with torque delivered right the way up to the 5,000rpm red line.

Gearchanges are slick, and the lever’s short throw offers a lightness we found perfectly suited the closely stacked ratios.

Steering felt instantly responsive, and the front wheels offered huge amounts of grip. The  system was accurate too, if lacking the ultimate feel and feedback on offer from front wheel drive cars like the new Ford Fiesta.

The Peugeot’s trump card, however, is its chassis – which is capable of absorbing the fiercest of abuse from the road and the driver, delivering controlled and fuss free progress even under the most challenging conditions.

As an example, you can brake hard into a corner to scrub off speed without causing the car to wander away from your intended line.

Purists, however be warned, while the RC-Z offers the same beautifully composed ride as the old 205GTI, it lacks that car’s enthusiasm for mid corner oversteer, and it’s beautifully weighted steering.

That means that where the 205GTI was a delight to drive through tight hairpin bends, and occasionally frightening through fast flowing corners, the RC-Z is the reverse – revelling in high speed turns, but left scratching around for traction when the road turns more sharply.

But this is a minor criticism. Clearly, Peugeot’s chassis team has managed to rediscover some of the magic that allowed it to dominate its rivals back in the late 1980’s. In the maker’s 200th year, we can’t think of a more fitting tribute to the past.