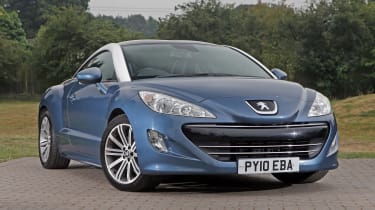 It’s a shame Peugeot hasn’t replaced the RCZ; it gave the brand’s range a boost, but was simply too niche. That Peugeot badge means residuals aren’t very strong, so there are bargains to be had – and there are plenty of reasons to want an RCZ, because this car’s beauty isn’t only skin deep. It’s great to drive, frugal and well equipped, plus surprisingly practical if used as a two-seater. Running costs are low, plus reliability is decent (if unspectacular). No wonder the RCZ won our Best Coupe award three years in a row – and now that it’s available used at keen prices, it makes just as much sense.

Peugeot doesn’t have much of a history when it comes to pure sports cars, although it has produced its fair share of them over the years – its focus has been on hot hatches. So when it unveiled the RCZ in 2009 it was a bolt from the blue; this was quite unlike any Peugeot previously available in showrooms.

The car was clearly inspired by the Audi TT, although unlike that model it was only ever offered in coupe form. But that wasn’t so bad because its double-bubble roof, expansive rear window and fabulously sleek silhouette conspired to make the RCZ look gorgeous from any angle. Now you can buy one for under £7,000, which is a bargain for a guaranteed future classic. 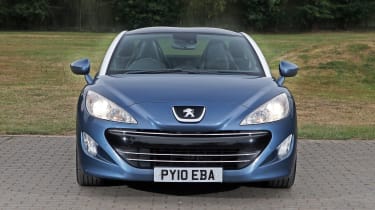 The RCZ arrived in July 2010, with a choice of petrol or diesel engines. The former was a turbocharged 1.6-litre unit with either 156bhp or 200bhp, while the latter was Peugeot’s excellent 2.0 HDi powerplant in 163bhp guise. A revised RCZ reached showrooms in March 2013, with a redesigned nose and minor interior trim upgrades, but in the meantime there were two RCZ special editions.

Just 75 Asphalt models were delivered in 2011 (in THP 200 form only), while the Magnetic of summer 2013 was available with any of the three engines. The final development was the RCZ R in January 2014, featuring a more powerful 270bhp version of the turbocharged 1.6-litre petrol engine found in other RCZs.

Which one should you buy?

You can choose between two trim levels (GT and Sport) and 1.6 petrol or 2.0 diesel engines, both turbocharged, and the latter in three states of tune. Only the THP 156 got an auto option, although it’s best avoided. 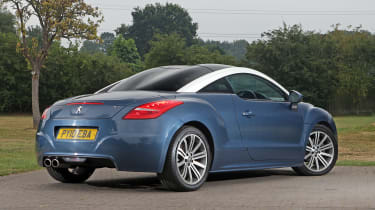 We favour the THP 200 with its sportier front suspension, but there are no bad choices. While the diesel works well, it’s more of a cruiser than a sports car; the RCZ R is quick, but rare and costly. The entry-level Sport features 18-inch alloy wheels, sports seats, dual-zone air-con, rear parking sensors, ESP and an active rear spoiler. GT spec adds leather trim, along with heated front seats, front parking sensors, automatic lights and wipers, and 19-inch alloys.

Alternatives to the Peugeot RCZ

The Scirocco offers typical Volkswagen build quality with a dash of style and healthy usability. There’s a range of superb engines and plenty to choose from, while the driving experience is decent – if not quite sparkling.

The Nissan 370Z comes in thirsty 3.7-litre V6 petrol form only, but it’s a blast because, unlike the RCZ, it’s rear-wheel drive, and you can buy open or closed versions – just beware of the poor refinement.

Or you could go for an Audi TT, the RCZ’s double. You get strong engines, excellent build quality and the security of four-wheel drive if you want it, plus there are coupé or convertible versions, but prices are steep compared with the Peugeot. 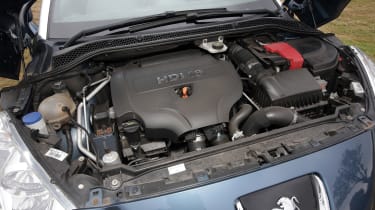 The door mirrors can make loud creaking noises as they fold in and out, while the motors which adjust the glass can seize up.

The RCZ doesn’t come with a spare wheel; it’s supplied with a tyre inflation kit. Peugeot does offer a £250 spare wheel kit, however.

Those aluminium roof rails look great, but they corrode, while the seals at each end also work loose, leading to annoying noises. 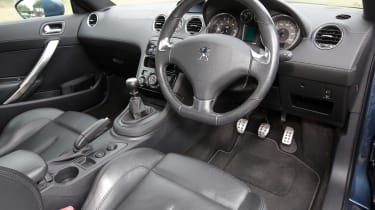 Most of the dash is borrowed from the 308, so it’s well stocked but looks too busy. However, soft-touch plastics and chrome give an air of quality, while the seats are comfy, although the back is a bit too tight for adults. They fold to increase load capacity, but with them up the boot holds 309 litres.

All RCZs have to be serviced every 20,000 miles or two years. Check-ups alternate between minor and major, priced at £140 and £250 regardless of which engine is fitted. Peugeot dealers also offer an Essentials option, using pattern parts, which cuts these costs to £115 and £195 respectively.

On top of this, fresh brake fluid is required every two years (at £49), while the use of long-life coolant means this only has to be checked at each service; there’s no specific requirement to replace.

The petrol engine is chain-driven, but the diesel has a timing belt that needs to be renewed every 10 years or 140,000 miles. Expect to pay £345 to have the work done, or £295 using the Essentials scheme. 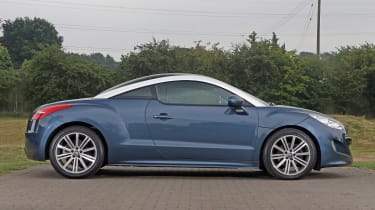 The RCZ has been recalled twice so far. The first was in June 2010, because of chafed brake hoses on cars built up to the end of March 2010. In February 2011, the second recall affected diesel-engined RCZs produced up to July 2010. These could suffer from the fuel pipe chafing and wearing through, leading to diesel leaks.

Possible fuel leaks also brought the most recent recall; the fuel filter cover could distort on diesel RCZs built between September 2012 and December 2014.

The RCZ didn’t feature in our Driver Power 2017 satisfaction survey, but it was in last year’s. Owners rated performance and handling (13th and 15th), but criticised the car’s ride quality and practicality.