Peugeot has put all its racing expertise into the new RCZ R. Can it beat the powerful Nissan 370Z Nismo? 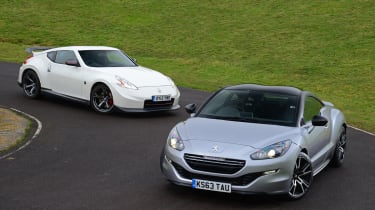 The best high-performance coupes match stylish looks with thrilling handling and blistering pace. But can a front-wheel-drive model ever be a true thoroughbred sports car?

Peugeot thinks so, as it’s just launched the highly tuned, race-bred RCZ R. Wide-ranging changes to its turbo engine boost power and torque to 266bhp and 330Nm respectively, making this the most powerful 1.6-litre engine you can buy. To keep this in check, the R also gets revised suspension, a limited-slip diff and bigger brakes.

However, for the same price, you could buy a traditional rear- wheel-drive V6 coupe, in the shape of the Nissan 370Z. Spend an extra £5,000, and you can get the recently launched Nismo model, with aggressive styling and lots of power. Will the old-school rear-wheel-drive bruiser win out over the lightweight, turbocharged, front-wheel-drive challenger? We hit some great British roads to find out.

Sporting heritage Nissan is hoping its Nismo arm will soon rival established performance brands such as BMW’s M Division. Formed in 1984, it’s been involved in racing and Japanese-market tuning so far, but now it’s going global. Peugeot Sport was founded in 1981 and has Le Mans and World Rally Championship victories to its name. Today, it focuses on building customer rally and racing cars.

As our figures show, this pair are very similar on pace. And you can see how close they were on track in our video at autoexpress.co.uk and in our figures on Page 65. The RCZ is very stable at high speed and agile in tighter corners. The Nissan feels heavier, but was entertaining in damp conditions with its rear-wheel-drive balance. 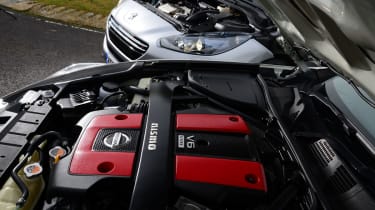 Nissan takes the traditional approach, with a large, normally aspirated 3.7-litre V6, while the four-cylinder Peugeot follows the current trend for turbocharging. It’s not quite as powerful as the Nissan, but we found it to be more responsive and free-revving.

Toyota GT 86 TRD TOYOTA Racing Developments’ version of the GT 86 adds a bodykit, bigger wheels and wider tyres. And at £31,495, it’s almost the same price as the RCZ R.

The RCZ R is one of the best front-wheel-drive performance cars we’ve driven. It’s pricey, but you can see where the money has been spent. Peugeot Sport has built a rewarding, well engineered coupé that’s faster and sharper than the standard car, yet just as efficient.

Nissan NISMO has improved the 370Z’s chassis, but it’s let down by a harsh engine, hefty price tag and excessive running costs. The extravagant bodykit is an acquired taste, too. So the Nissan isn’t as fast, cheap, clean or – crucially – fun to drive as the new Peugeot.