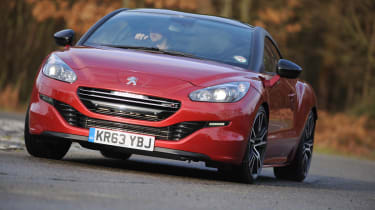 At £31,995, the Peugeot RCZ R doesn’t come cheap – especially compared with some of its capable rivals. But when you consider the race-winning expertise and motorsport components that have gone into it, this doesn’t seem such a huge price to pay – and it’s well worth the £5,000 premium over the standard RCZ range-topper. While it’s a pretty hardcore option, the extreme set-up and addictive performance ensure the RCZ R is a car a keen driver will enjoy getting the most out of.

Since Peugeot pulled the plug on its Le Mans racing campaign, its Peugeot Sport motorsport department has had a different challenge to contend with. It still creates racers – it built the crazy 208 that set a record at last year’s Pike’s Peak hillclimb in Colorado, and a new 208 R5 rally car is coming. But it’s also turned its hand to the Peugeot RCZ R.

Aside from super-supportive sports seats and the stubby gearknob from the Peugeot 208 GTi, the interior is unchanged from the standard coupé’s. Yet turn the key and it’s clear this RCZ is all about the tweaks you can’t see. The 1.6-litre engine has been completely overhauled, upgraded and tuned to deliver 266bhp and 330Nm of torque, and sends a nice, bassy rasp down the modified exhaust.

A Sport button would be superfluous, as the RCZ R is simply very quick at all times. While the car is a little reluctant at first, it has an addictive turn of pace once the turbo kicks in. It gives its best performance at the top end of the rev range, so you need to snick through the ratios often. It retains the oddly high clutch pedal set-up from the standard car, but the gearshift is heavier and more satisfying.

Ride firmness is the same as the top-spec RCZ’s, so the newcomer is no less comfortable around town. Peugeot Sport has totally overhauled the geometry, though, ensuring that the suspension and damping give the handling a razor-sharp edge.

Turn-in is extremely direct, while traction is excellent in the dry. It’s helped by the addition of a Torsen limited-slip diff that keeps the front end glued to your chosen line. However, the car is more entertaining on greasy UK roads – the chassis is adjustable on the throttle in the damp, whereas it simply ‘grips and goes’ in the dry.

You must be careful driving hard when the conditions are tricky – gentle on the throttle out of bends to avoid spinning the front wheels and provoking torque steer, and smooth with the steering so as not to cause the back end to slide. The rear suspension is a huge 44 per cent stiffer, so there’s much less warning when the car is about to let go.

At least the brakes are extremely powerful. The rear discs are carried over from the standard car, but the fronts are upgraded 380mm Alcon discs and calipers to the same spec as the old 206 WRC model.

You have to respect the RCZ R in more ways than one. Peugeot Sport has used its race-winning know-how to build a fairly extreme driver’s car, complete with an engine and suspension that are at home on a track and close to the edge of what you’d want on the road. You also have to understand that the extreme set-up means the car will bite in a way that a fast Ford doesn’t, especially in poor weather.

When it comes to pure fun and driving thrills, the £31,995 RCZ R is in a completely different league to the VW Golf GTI, too, making the VW feel anaesthetic in comparison. This all bodes well for the arrival of the 308 R later this year; if that car is half as much fun as the RCZ R, it’ll have the Golf running scared.