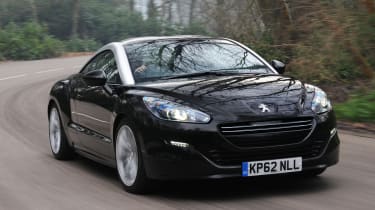 Coupes are all about style, and the RCZ still delivers on that score. The new nose brings the car in line with Peugeot’s latest models, and adds a dose of sophistication – even if it isn’t as distinctive as the original. That said, the RCZ is still well equipped and drives with plenty of verve, thanks to the grippy chassis and potent, efficient diesel.

It's nearly five years since Peugeot hinted at a return to great design form by revealing the RCZ at the 2007 Frankfurt Motor Show. And since then, things have moved on again.

Peugeot’s design direction has shifted, with mainstream cars like the 208 hatchback looking much sharper. So now it’s the turn of the brand’s style statement coupe to benefit from a mid-life refresh.

The major changes concern the nose. The RCZ originally featured a similar front bumper to the first 308, with a full-width horizontal bar that appeared to jam its gaping grille open. This new RCZ gets its own unique front bumper design, with a front grille that’s splitinto two distinct parts.

The smaller trapezoidal upper grille is similar to the 208’s, with the same Peugeot lettering on its upper edge. This sits above a wider wing-shaped intake that has daytime running lights in its outer edges. Add in more angular, modern-looking headlights and the RCZ certainly looks more up to date.

To our eyes it’s a definite improvement, but the angular new nose jars slightly with the curves of the RCZ’s rear – including its cool tail-lights, double-bubble roof and rear window – which are unchanged.

There are some new personalisation options for the exterior, including a choice of 10 different alloy wheel designs (two of which are all-new), two different roof rail colours (grey or matt black) and some decal packages, such as racing stripes that run over the roofand down the back of the car.

The interior is relatively untouched, with a few tweaks around the gearlever and on the doors the only changes. Unfortunately, that means the awkward driving position, with its high-set pedals, also remains.

The RCZ is only available in Sport or GT spec, with the latter predicted to account for 80 per cent of sales. GTs now get automatic headlights and wipers, plus a better-insulated windscreen to cut road and engine noise, which brings a noticeable improvement in refinement.

The ride can be quite harsh at times, given the firm suspension, 18-inch wheels and low profile tyres. However, the trade-off is impressively little body roll in corners and loads of reassuring grip. This is backed up by direct steering, decent brakes and a slick six-speed gearbox. The 2.0-litre turbodiesel engine is potent in-gear, too, thanks to a generous 340Nm of torque.