The 601bhp plug-in hybrid Polestar 1 coupe has arrived, but is it worth the £139k asking price? 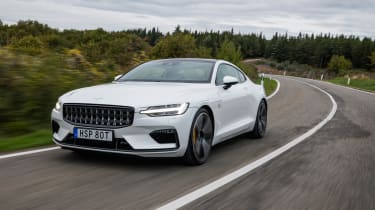 While every other manufacturer is trying to shuffle people into bloated electric SUVs, Polestar’s elegant coupe is a breath of fresh air in the plug-in segment. It might be as heavy as some of those SUVs, but it’s more engaging to drive. A firm ride and poor boot space do harm its GT credentials, though.

There’s no shortage of companies ready and willing to turn your six-figure sum into a sports car these days, so any manufacturer muscling in on a market dominated by names such as BMW, Mercedes, Aston Martin and Porsche has to do something pretty special to stand out.

For Volvo-owned Polestar, that something is the plug-in hybrid Polestar 1 coupe, and while customers might balk at the idea of spending £139,000 on something developed in Sweden, the newcomer fights back with a 601bhp drivetrain, carbonfibre structure and one of the most handsome shapes we’ve seen in years.

It’ll certainly have no trouble standing out if the reactions of passers-by are any indication. The Polestar 1 has enormous presence despite its relatively subtle detailing and crisp, clean lines - at once classically elegant and utterly contemporary. 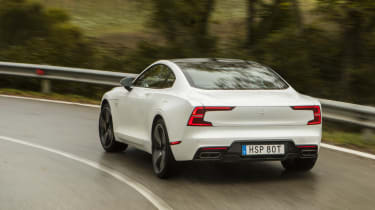 It’s a shame the interior isn’t quite as striking, with much of the dashboard architecture lifted wholesale from the Volvo S60 and V60, including the digital instruments, portrait-style centre touchscreen, and three-spoke steering wheel.

Still, the quality is every bit as good as others at this price point, and the frameless doors and absence of B-pillars give the cabin an airy feel. The seats are supremely comfortable too, though this is definitely a 2+2 rather than a proper four-seater - the rear’s better for kids or luggage than adults.

Given the grand tourer billing, the boot is inadequately sized too, half occupied by the battery and attendant electronic controls. If there’s a saving grace, it’s that Polestar has chosen to show off the electronics behind a clear, annotated panel, rather than cover them in carpet - it’s a neat detail, and feels like the electric vehicle equivalent of a supercar’s glass engine cover.

The Polestar 1’s drivetrain is certainly more complex than its styling. Up front is a 2.0-litre, turbocharged and supercharged four-cylinder petrol engine. In the middle are a pair of battery packs, and the rear axle is powered by a pair of electric motors, good for a 78-mile WLTP range on EV power alone.

Combined, the whole system is good for 601bhp and a thumping 1,000Nm of torque, but despite bodywork made from lightweight carbonfibre-reinforced plastic (CFRP), the 1 still weighs in at 2,350kg - as much as many recent electric SUVs. 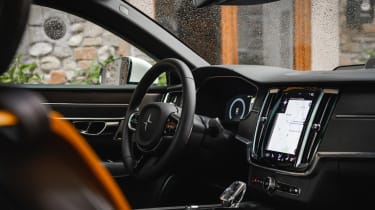 Still, the powertrain does a good job of masking the car’s weight under acceleration - a 4.2-second 0-62mph time doesn’t do justice to the instant, electric-assisted response and supercar-like surge through the gears. Enormous brakes gamely haul the car back down from speed too, and in the gentler hybrid and electric modes there’s enough regenerative braking for one-pedal driving.

Accurate steering, enormous grip and great body control, plus torque vectoring from the electric motors, make the 1 surprisingly agile too, though in quick direction changes you’re aware of how much mass is moving around.

We’d be tempted to tweak the manually-adjustable Ohlins dampers too, as the ride quality as tested was pretty firm. It smooths out at speed though, and that’s where the Polestar 1 is ultimately happiest - as a fast, comfortable, quiet and incredibly stylish grand tourer.