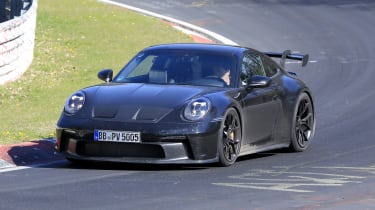 The next Porsche 911 GT3 has been spotted testing by our spy photographers at the Nurburgring, ahead of the car’s expected launch later this year.

The images reveal new details that weren’t visible on the previous occasions we’ve caught a glimpse of the 911’s track focussed variant, notably during the company’s official Super Bowl advert in February.

At the front, Porsche’s engineers have ditched the GT3’s distinctive, wide, single aerodynamic outflow component right at the tip of the bonnet, replacing it with two smaller grilles tapering back towards the windscreen.

Meanwhile, the main air intake is more pronounced than before, although it’s not clear if this forms part of the final design.

At the back, it’s more obvious that the rear bumper isn’t representative of the car we’ll see in showrooms, but we can spot a large rear diffuser.

Elsewhere, the scoops underneath the rear window have vanished, replaced by a pair of panels designed to smooth airflow as it approaches the rear wing. As in previous spy shots, there’s an enormous rear wing that’s hung from the top rather than underside like you’ll find on the outgoing model, aping the full-spec RSR racing version of the car.

This 911 GT3 features the same full-width LED light-bar fitted to the standard version of the latest 911, but its wheel arches are noticeably more flared to accommodate the car’s wider track and larger wheels and tyres. The pair of central-exit tailpipes have also been retained.

Performance details remain unknown but we expect to see the same 493bhp, naturally aspirated 4.0-liyre flat-six engine found in the limited-run 911 Speedster sat in the 911’s trademark rear engine bay. Both dual-clutch and manual transmissions are expected to be available, along with Porsche’s rear-wheel steering system. Further developments, including a GT3 RS model, will follow from 2021.

Now read our review of the standard Porsche 911. Let us know your thoughts in the comments section below…