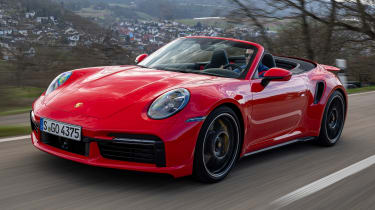 Other performance cars are better at turning heads, but if you want massive performance in a relatively subtle package that’s easy to use every day, then the Porsche 911 Turbo S has few peers. Its breadth of ability is astonishing, from supercar-rivalling pace to everyday levels of comfort and usability. But such a piece of kit doesn’t come cheap, with this edition priced from £165,127.

Sometimes tasks that appear easy require a lot of effort. When asked what had been at the top of the specification sheet for the development of the new Porsche 911 Turbo S, the man in charge of the project, Frank-Steffen Walliser, gives a simple answer: “The heart of every 911 Turbo is the engine.”

The 3.8-litre flat six in the new 911 Turbo S is the same size as the outgoing model’s, but it’s all new. It’s based on the 3.0-litre unit used in the Carrera models, but Walliser vehemently rejects that it’s simply “bored out” for the Turbo. “We have invested a three-digit million sum,” Walliser adds.

This was necessary in order to comply with emissions regulations, but at the same time Porsche was able to increase output to 641bhp – a 69bhp increase over its predecessor, a car that didn’t exactly leave you wanting for more performance. “You don’t just pull something like that out of a hat,” says Walliser. 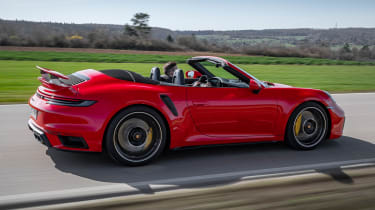 The list of improvements is long, and starts with larger variable-geometry twin turbochargers, which are identical to those in the 911 GT2 RS. The turbos now rotate in opposite directions on the right and left cylinder banks, thus creating the same flow conditions. Added to this are electronically controlled wastegate flaps and a new intake manifold with larger intercoolers, which are now positioned above the engine.

Elsewhere, 20 and 21-inch wheels are fitted front and rear, while the suspension has been lowered by 10mm when compared with the Carrera. One thing that hasn’t been changed with the latest 911 Turbo S is its hefty kerbweight. This Cabriolet version tips the scales at 1,710kg, so it loses out to rivals such as the McLaren 600 LT Spider.

But on the road, the Porsche’s power-to-weight ratio more than makes up for this. Thanks to a vast 850Nm of torque, the drop-top Turbo S can sprint from 0-62mph in 2.7 seconds, and in another 6.6 seconds it reaches 124mph. The car’s acceleration is relentless, and it only begins to tail off once you hit 186mph.

However, the Turbo S is a driver’s car that doesn’t catch you off guard, and is actually pretty easy to drive fast. It remains stable during hard acceleration and under braking, too, courtesy of the carbon-ceramic discs and 10-piston calipers that can be precisely controlled with good pedal feel. 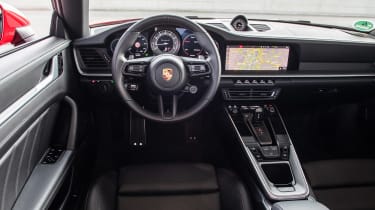 The electromechanical steering remains a benchmark, too. It’s very precise and reports the precise levels of grip at the front axle; so although this is a heavy car, it feels more nimble and responsive than you’d think. At the entrance of a corner, the 911’s front end virtually pulls itself into the bend and remains neutral, even when cornering at high speeds. This traction is a result of the improved four-wheel-drive system, a wider track, and a reinforced front axle that can now distribute up to 500Nm of torque to the front wheels.

The rear of the car remains firmly planted, too, and will only really begin to squirm if you stamp hard on the throttle out of corners. When accelerating, the eight-speed dual-clutch transmission is seamless, with the engine delivering the best of its thumping performance beyond 2,800rpm.

Of course, a 911 Turbo S Cabriolet is no executive saloon, but it’s perfectly capable of covering longer distances and more mundane driving tasks. It features Porsche’s trademark suppleness on the road, and strikes a great balance between comfort and agility. As before, there are two small rear seats in the Turbo S, but again, they are only suitable for children or extra luggage.

The cabin itself is also a special place to sit. Porsche’s 10.9-inch infotainment system is very slick, while the beautiful analogue rev counter that rests behind the steering wheel amid a bank of digital dials reminds you of what this car is capable of every time you climb aboard.