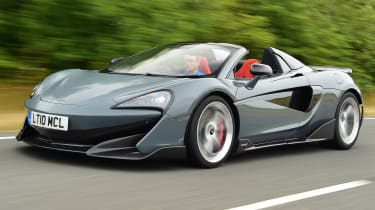 The 600LT Spider is one of the finest McLarens ever to emerge from the British brand’s Woking base, and given McLaren has such a strong back catalogue, that’s saying something. The 600LT’s limits are superbly high, yet the car doesn’t feel aloof to drive. In fact, it’s one of the most communicative and enjoyable cars around, and it delivers a level of ability few can match without sacrificing fun. The theatre the LT brings is amplified in the Spider package.

McLaren’s development story is incredible. In a decade it’s gone from launching its first proper production car to beating the established set at their own game in multiple classes, refining its offerings through an iterative process that’s seen new cars launched and its creations continually improved upon. All of the know-how, exploits with hybrid hypercars and the trickle-down of tech from the race track to the road has led us to this: the 600LT Spider.

The formula is simple here. It’s a convertible version of the most hardcore Sports Series model on sale, and as such boasts similar stats.

Its 3.8-litre twin-turbo V8 engine makes 592bhp and 620Nm of torque, it’ll fizz, blare and gargle its way from 0-62mph in just 2.9 seconds and will top 200mph flat-out. All of these points are true of the 600LT Coupe, too, and that McLaren has managed to retain these attributes in the transformation to Spider is extremely impressive – yet it’s not the most astonishing thing about this car. 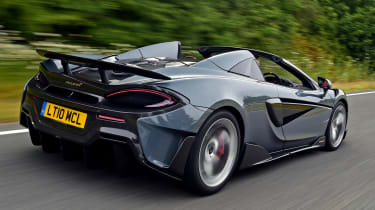 Early McLarens were short on fun, texture, enjoyment – call it what you will. The 600LT Spider is not and blows that notion away through a beautifully balanced amalgamation of technology and character.

The MonoCell II chassis means the car weighs just 48kg more than the 600LT Coupe, and because of the construction of the carbon fibre tub the Spider requires no additional strengthening. It’s as rigid as the Coupe and therefore just as sharp to drive.

Compared to the other Sports Series Spider – the roofless 570S – this car is 100kg lighter, showing the length McLaren has gone to in its development. However, it retains that car’s folding hardtop that can be operated electrically in 15 seconds at up to 25mph, plus the moveable rear window.

These two elements partly define the experience, as the howl from the LT’s trademark top-exit exhausts as the engine comes on boost is like nothing any other supercar delivers and, with the window down or roof off, it’s piped through to the cabin with vicious clarity.

The engine is a little laggy, but this just serves as a pause to savour the experience before the motor romps through the mid-range and onto its shrieking top end.

There’s solid, boost-assisted torque lower down, where the exhaust note is a gurgle. By 8,000rpm it turns into a cacophonous howl. It’s almost as loud slowing down thanks to the taut cracks that come from the exhaust on downshifts – and the seven-speed dual-clutch’s response is rapid when changing down. You get the occasional thump and hesitation going up the ratios, but it’s mostly just as quick changing in this direction. 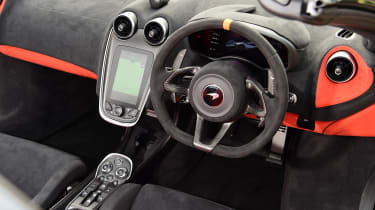 The other area that defines the 600LT Spider is the way it rides and steers. You might think a track-focused car like this would be a boneshaker. It isn’t. There are three modes for the chassis once the Active Panel is engaged, in Normal the McLaren skips over bumps that you wince at needlessly moments before the wheels make contact. It shames some premium saloon cars when it comes to ride comfort.

In Track mode the 600LT feels galvanised. It’s maybe slightly too taut for anything other than smooth A roads, but on an uncorrupted stretch the car is locked to its line, working the Pirelli Trofeo R tyres’ soft compound into the road surface to extract as much grip as possible.

The steering tells you exactly how much of that commodity there is available as the electro-hydraulic setup gives crystal messages as to the front axle’s trajectory and the car’s weight distribution. It’s the perfect speed too. Not too fast so the car feels nervous or skittish, with plenty of stability, but not so slow that it compromises agility. It’s easy to get a measure for how quickly the 600LT will dart towards an apex, inspiring confidence to drive it harder and harder. 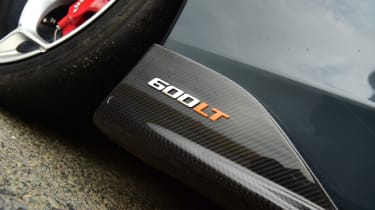 There’s clearly an incredible level of technical competence here, but the way the details combine to make something that’s so enjoyable and immersive is the 600LT Spider’s real forte.

For all its aggressive intent with the ground-skimming splitter and other aerodynamic addenda – including the wing and big diffuser, which contribute to generate 100kg of downforce at 155mph – the LT is surprisingly usable. The ride is as the heart of that, but great forward visibility afforded by the carbon tub and its low scuttle, a 150-litre boot in the nose and an extra 52 litres behind the cabin with the roof up means there’s more practicality than you might think.