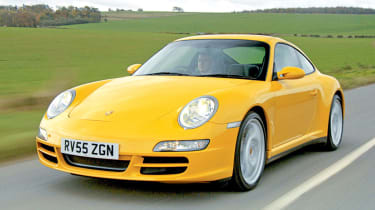 Yes, a 2005 model year 911 really can be yours for the price of a new Ford Mondeo. Porsche’s sports car legend has always done well in our annual shoot-out, and the fearsome reputation the 911 built in its early years had been all but eradicated by the time this 997 version arrived in 2004.

The Carrera S comes with a 355bhp 3.8-litre flat-six, and as long as you avoid the Tiptronic auto, it will provide more than enough entertainment and make faster 911s seem expensive.

This is a tempting package, with the fluid steering offering masses of feedback, plus a chassis that is equally capable on motorways as it is in corners.

Of course, a Porsche won’t be cheap to own, even if you get it serviced by an independent specialist, but as long as you can make the sums work, you’ll be rewarded with one of the best sports cars money can buy.

A near production-ready version of the latest BMW 4 Series Coupe has been spied, wearing a pair of huge kidney grilles.
Visit/skoda/octavia/108266/new-skoda-octavia-estate-review

Morgan has revealed the latest iteration of its popular Plus Four, featuring a BMW-sourced 255bhp turbocharged four-pot
Skip to HeaderSkip to Content