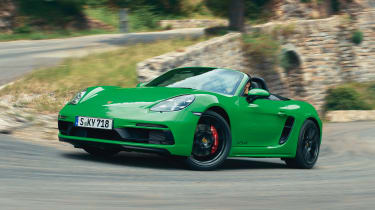 This is the new Porsche 718 GTS 4.0, which, following in the footsteps of the 718 Cayman GT4 and 718 Spyder, sees Stuttgart’s entry-level sports car return to six-cylinder power.

The GTS uses a mildly detuned version of the naturally aspirated 4.0-litre boxer engine fitted to the Cayman GT4. Here, the engine makes 395bhp - 19bhp less than the GT4 - and revs up to a 7,800rpm red line, piped to the rear of the car via a sports exhaust system. Both coupe and roadster feature a manual six-speed transmission as standard.

The result is a 0-62mph time of 4.5 seconds for both the Cayman and Boxster GTS, and a 182mph top speed. That’s four tenths and 2mph quicker than the outgoing four-cylinder Cayman GTS.

The new six-cylinder motor is slightly thirstier with Porsche claiming fuel consumption has dropped from 28.5mpg to 25.9mpg, while CO2 emissions are up 36g/km, to 246g/km.

Engine aside, the rest of the GTS features are similar to those of the previous 718 Boxster and Cayman models. Porsche's PASM adaptive damping system controls a suspension set-up that sits 20mm closer to the road than lesser variants. Drive is sent to the rear wheels through a mechanical limited slip differential, while active drivetrain mounts adjust their firmness to offer precision when cornering and comfort at a cruise.

The GTS models ride on a set of 20-inch alloy wheels with 235mm-section tyres at the front and 265mm items at the back. The wheels house cross drilled discs gripped by red Porsche calipers, with ceramic composite discs available as an option.

From the outside, GTS models are set apart from the rest of the Boxster and Cayman line-ups courtesy of black accents for the spoiler lip, air intake and rear diffuser, while the head and tail lamps gain a smoked finish.

Are you pleased to see the 718 Cayman and Boxster GTS models return to six-cylinder power? Let us know your thoughts below...