The switch to four-cylinder engines has robbed the Boxster of some character, but it's faster and sharper to drive than ever

When Porsche overhauled the Boxster’s engine line-up, it also treated its chassis to a thorough makeover. The 718 gets the 911 Turbo’s steering rack, which is 10 percent more direct than the old car’s.

And that’s not all, because you can add Porsche’s PASM adaptive dampers that come with a 10mm lower ride height, while the S models can also be fitted with a 20mm lower Sport pack. And as before, there’s the option to add a limited-slip differential, which helps boost traction out of slower corners. 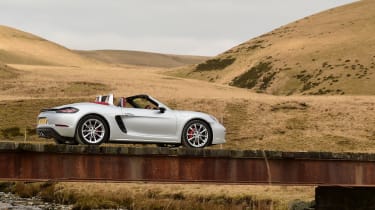 On the road, these changes make an already excellent car exceptional. The faster steering delivers scalpel sharp turn-in, plus there are huge reserves of front-end grip to lean on, allowing you to place the car with uncanny precision. What’s more, the smaller steering wheel is perfectly weighted and delivers just the right amount of feedback.

The mid-engined layout means the Boxster feels beautifully balanced mid-corner, plus it allows the car to change direction with acrobatic agility. And, because all the engines in the Boxster line-up deliver so much more torque, it’s easy to trim your line through a bend using the throttle.

Cars equipped with the PASM system are even more impressive, although the Sport mode is a little too stiff for really bumpy back roads. Even in the Normal setting the Porsche benefits from hugely impressive body control – there’s barely any roll through corners, while big compressions and sudden crests are effortlessly shrugged off. 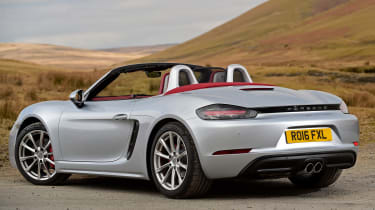 Another dynamic highlight is the upgraded braking system. Standard and Boxster S models get the same 330mm discs and four-piston calipers. Both versions serve-up eye-popping, fade-free stopping power, plus they boast a beautifully weighted and progressive pedal action that makes it easy to modulate your braking.

Yet there’s more to the Boxster than back road driving thrills. The perfect driving position and decent visibility make it a doddle to place on the road, while the revised clutch is much lighter meaning you no longer have to build up a sweat in stop-start traffic.

In their Normal setting the dampers provide a remarkably supple ride, while the well-insulated fabric hood does a good job of keeping out wind noise on the motorway. You can lower the powered roof in a matter of seconds and the standard wind break between the front seats helps to keep buffeting to a minimum.

The 718 Boxster T was a later addition to the range and uses the same 2.0-litre unit as the entry-level car, but adds a number of sporty updates to promote a more driver-focused character. The car concentrates on mechanical changes like lower suspension, adaptive PASM dampers and a limited-slip differential with torque vectoring, along with Porsche’s Sport Chrono pack. Adding all these extras individually to the standard 718 would be more expensive, too.

Porsche has focused its efforts on making the T one of the purest sports car experiences in the range – it’s worth considering if engagement is more of a priority than outright speed. The T’s excellent chassis is brilliant enough to outshine its slightly lacklustre engine. If you can afford the extra £12,000, the six-cylinder GTS moves the game on somewhat, with bags of extra power and similar mechanical changes to the T version.

The entry level-Boxster gets a 2.0-litre flat-four ‘boxer’ engine that develops a healthy 296bhp, which is a 35bhp increase over the old six-cylinder model. More impressively, peak torque has swelled by 100Nm to 380Nm and is delivered at just 1,950rpm.

As a result, this model is far faster than its predecessor, with the six-speed manual version sprinting from 0-62mph in just 5.3 seconds. Add the launch control-equipped seven-speed PDK twin-clutch transmission and this time drops to 4.7 seconds.

The Boxster S uses a larger 2.5-litre version of the same boxer engine, plus its turbocharger benefits from the same variable vane geometry technology as found in the 911 Turbo. As a result, it pumps out an impressive 345bhp and a thumping 420Nm of torque, at a lazy 1,900 rpm. This allows the standard car to scorch from 0-62mph in a blistering 4.9 seconds, while the PDK version reduces this time to a supercar-baiting 4.2 seconds.

With both turbocharged four-cylinder engines, it’s the massive improvement in real world performance that really impresses. With so much torque on tap at low revs, the Boxster feels incredibly quick. It doesn’t matter what gear you’re in, simply squeeze the throttle and the 718 is catapulted down the road. Better still, the flat-four units have a similar appetite for revs as the old six-cylinder cars and will spin eagerly and happily to a 7,500rpm redline.

Surprisingly, it's actually the 2.0-litre engine that's the better bet. It lacks the outright performance of the S, but revs more sweetly and sounds less strained when extended. And because there's less mid-range muscle than in the 2.5-litre machine, you have to work the engine harder, which means you feel more involved in the process of driving the Boxster quickly.

Of course, what’s missing from both engines is the spine-tingling howl of the traditional flat-six. That said, the gravelly low-speed soundtrack and high-rev growl isn’t without appeal, especially if you add the optional sports exhaust. This addition delivers a high-rev scream that's reminiscent of the old 356 Carreras of the Sixties, while lifting off the throttle results in the odd delicious pop and crackle from the exhaust.

In terms of transmissions, the seven-speed PDK is very easy to live with. Not only does it boost performance, it responds quickly and crisply to the wheel-mounted paddles, yet is silky smooth when left in automatic mode. However, for the ultimate sports car experience we’d stick to the standard six-speed manual, which draws you into the action with its short throw and beautifully mechanical action.