Turbocharged engines improve efficiency, while any Boxster model is a solid, long-term investment

You don't buy a turbocharged mid-engined roadster to save on your motoring bills, but the 718 Boxster is more cost effective to run thanks to its new four-cylinder engines, even when you consider the revised MPG figures from the latest WLTP test regime.

For instance, when fitted with the optional PDK gearbox the entry-level car now claims up to 33.2mpg and emits 180g/km of CO2. Stick with a six-speed manual model and Porsche’s figures suggest you’ll return up to 32.5mpg, while emitting 186g/km. Not too shabby for a 170mph sports car. 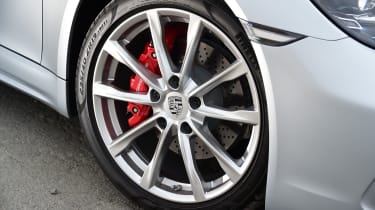 The Boxster S isn’t quite as efficient, but like its less-powerful brother it’ll make a smaller dent on your wallet than its predecessor. Once again, it’s the PDK-equipped car that’s the most frugal, with figures of 30.7mpg and 194g/km claimed by Porsche. The manual car records 29.1mpg and 210g/km.

Meanwhile, the hardcore GTS is only offered with a six-speed manual box and delivers figures of 25.9mpg and 246g/km of CO2. Of course, if you frequently access the full performance potential of these cars, then you can expect to see your fuel returns plummet. And, while the Boxster’s CO2 emissions have been reduced, an increase in list price means company car users will be no better off when it comes to benefit-in-kind tax bills.

British security and insurance experts Thatcham have placed the Boxster in groups 48-49, which isn't far off the top grouping of 50. In comparison, the hard-topped 718 Cayman sits between group 42-46, despite it having the same performance - that's the price you pay for the Boxster's more vulnerable fabric roof.

That said, all models get a Thatcham category one alarm and immobiliser, plus there’s also a standard tracking device – although you’ll have to pay an annual subscription fee to its service provider.

Given the desirability of the Porsche badge, it’s no surprise to find the Boxster is sought after on the second-hand market. As a result, our experts have calculated that the 718 will retain around 50 percent of its new value after three years and 36,000 miles.

Surprisingly, it’s manual gearbox cars that are the most resistant to depreciation, with both standard and S models attracting just over 53 percent of their list price over the same 36-month period. The PDK cars attract a figure of 47 percent.