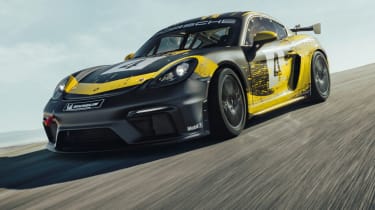 Porsche has revealed a new racing car in the form of the 718 Cayman GT4 Clubsport, which is a close glimpse of the upcoming 718 Cayman GT4 road car which will debut later in 2019.

Visually, the 718 Cayman GT4 Clubsport gets all the usual motorsport trappings in the form of more aggressively sculpted front and rear aprons for additional downforce, a huge rear wing and a stripped out cabin complete with racing seats, a racing steering wheel, a full roll cage and a six-point harnesses.

However, carbon fibre isn’t used nearly as extensively as you’d imagine. The 718 Cayman GT4 Clubsport tips the scales at 1,320kg, and the doors and rear wing are constructed using an organic fibre mix using flax and hemp fibres, which Porsche says is similar to carbon fibre in terms of weight and strength. Overall, the racing model is 130kg lighter than a 718 Cayman GTS. 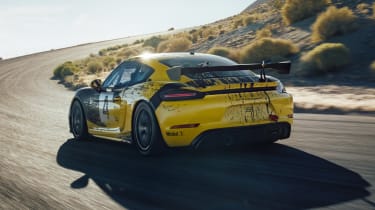 The big news though is that this is the first 718 badged Cayman to be equipped with a six-cylinder engine, confirming that the road going 718 Cayman GT4 will receive a significantly larger engine than the rest of the 718 line-up.

A turbocharged flat-four is not found behind the driver, instead, a 3.8-litre naturally aspirated flat-six is present, delivering 419bhp and a red-line of 7,500rpm. Power is transferred to the rear axle via a Porsche PDK six-speed dual-clutch gearbox.

Globally, Porsche Motorsport will offer the 718 Cayman GT4 Clubsport in two flavours. A Trackday model will be aimed at track drivers and enthusiasts, while the Competition model is a variant fully prepped for national and international motor racing. In the UK, only the Competition model is offered, with order books open now priced from £130,000 before VAT. First deliveries are in February.

Click here to read our in-depth review of the Porsche 718 Cayman right now...