New Porsche 718 Cayman GT4 revealed, and it’s got a flat-six 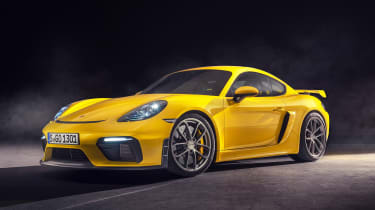 The current Porsche 718 Cayman has taken some criticism for the character of its four-cylinder ‘boxer’ engine – but the German sports car is reverting back to six-cylinder power for its most extreme version yet, the 718 Cayman GT4.

The fresh range-topper gets a new 4.0-litre motor that is derived from the engine seen in the latest Porsche 911, but without the turbochargers. In the smaller car, it delivers 414bhp, a gain of 35bhp over the previous Cayman GT4, along with 420Nm of torque between 5,000 and 6,800rpm. The rev limit is 8,000rpm.

That’s enough to take the GT4, equipped with a six-speed manual gearbox, to a top speed of 189mph (more than 300kph) and from 0-62mph in 4.4 seconds. Porsche also claims that the 718 Cayman GT4 can lap the Nurburgring Nordschleife circuit in Germany more than 10 seconds faster than its predecessor. 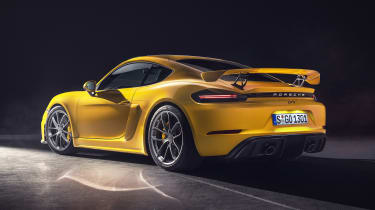 The new engine can shut down two cylinders under light throttle loads to save fuel, and Porsche says that the 718 Cayman GT4 manages 26mpg under the older NEDC efficiency test. That should equate to about 22mpg under the tougher WLTP regime.

The 718 GT4 also benefits from various aerodynamic tweaks. Porsche claims up to 50 per cent more downforce, with no adverse effect on drag. There’s a new design of exhaust, which allows for a rear diffuser that delivers around 30 per cent of the rear downforce. And the fixed rear wing produces around a fifth more downforce compared with the previous generation.

The chassis incorporates 30mm lower suspension than a standard Cayman’s, a locking mechanical rear differential and, as an option, a Clubsport package that adds a rear roll bar, a fire extinguisher and a six-point seatbelt for the driver’s seat.

Are you pleased to see Porsche return to six-cylinder power for the Cayman GT4? Let us know your thoughts below...