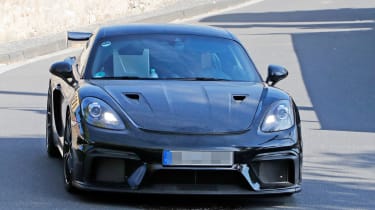 While all of the focus on Porsche has been on the all-electric Taycan in recent days, that doesn’t mean that the iconic brand hasn’t forgotten its combustion-powered roots. The proof is in this: the new Cayman GT4 RS.

Captured in these spy shots, the GT4 RS takes a more extreme, race-bred take on the existing hottest Cayman, the GT4. The differences between the two are most clear in the new car’s aerodynamics: the rear is dominated by a vast adjustable rear wing, while the front has a deeper splitter to balance out the extra rear downforce.

Other changes appear to have been dictated by the need for extra cooling. The front bonnet is set apart from the existing GT4 by a pair of NACA ducts, while the small quarterlight windows behind the side doors have been replaced by panels with further vents cut into them.

Elsewhere, the test mule rides on wheels identical to those used by the current GT4. Carbon ceramic brake disks are housed behind the front wheels, while the rears appear to be steel items. 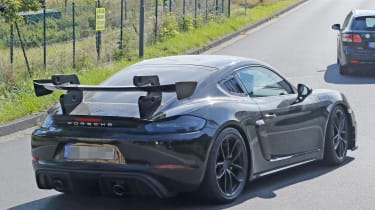 It’s too early to know full technical specs of the GT4 RS, but we expect that power will come from a more extreme version of the 3.0-litre flat six used by the GT4. If it follows the trend of its big brother, the 911 GT3 RS, it’s likely that the GT4 RS will use a PDK automatic transmission in place of the GT4’s six-speed manual.

Speaking on the likelihood of a Cayman variant sitting above the GT4, Frank Walliser, head of Porsche Motorsport, appreciated the appeal of such a car and didn’t rule out the prospect of one making production. "Everybody is asking for the RS. The honest question is can I imagine it, of course I can, but this does mean we have made a decision. Look at what are the possibilities within Porsche Motorsport for a car like that."

There’s no confirmation from Porshce of when it’ll come out, but testing appears to be at a fairly advanced stage, so we’d expect the car to make its debut in 2020.

Read all the news from the 2019 Frankfurt Motor Show here...