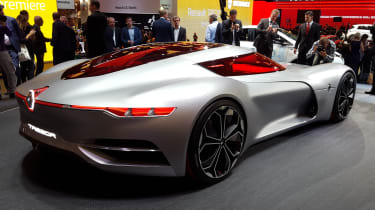 Renault has a habit of wowing its home crowd at the Paris Motor Show with stunning concepts and the Renault Trezor certainly fits that bill. The Trezor represents the latest chapter in the company’s design story under design boss Laurens van den Ackar.

His first concept, Dezir back in 2010, represented a couple falling in love: “It was love at first sight”, van den Ackar told us. Now with Trezor the story has moved into its next phase…

“This is still a story of love, but it’s more mature,” says van den Ackar. “Now the couple have been together for a while and he’s about to pop the question. So the drama of Trezor’s roof opening represents the opening of a ring box and revealing something very special inside.” Quite. 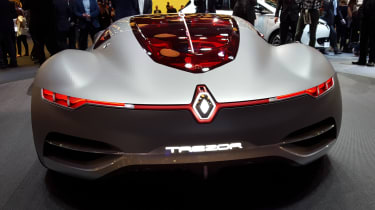 More importantly is what the car represents: Dezir led Renault’s renaissance, starting with 2012’s Clio, moving through Captur, Kadjar and Mégane and finishing with the new Koleos SUV also shown at the Paris Motor Show.

Trezor previews the regeneration of that range, likely to start with the next Clio, which we’ll likely see at 2018’s Paris Motor Show. Those oversized C-shaped front lights surrounding large air intakes and running into a slimmer grille, along with the advanced L-shaped dashboard are all expected to make it into production in some way shape or form. 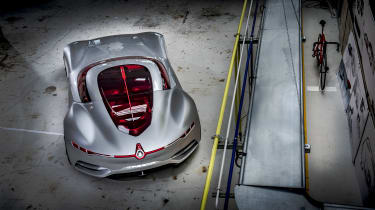 Much of the rest of Trezor’s design appears to be stunning fantasy, but with a surprising grounding in reality. Renault is unlikely ever to produce a pure GT like this – that could be the job of Alpine, eventually. But the technology underneath this driving concept (few concept cars can actually move under their own steam) is very real.

Two battery packs are split front and back to aid weight distribution, while the motor produces 345bhp and torque of 380NM, getting Trezor from 0-62mph in under four seconds. 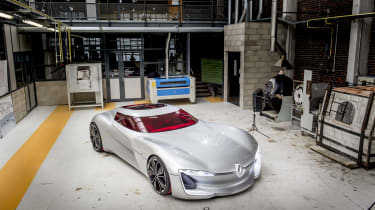 The carbon fibre bodywork itself is a work of art, with a more feminine smooth finish at the front, juxtaposed with a more masculine hexagonal print in the bodywork at the back. The hexagonal honeycomb pattern on the bonnet isn’t just for show, either – some of them pop up to provide cooling for the batteries.

And at the rear, fibre optic lights lit by lasers twist to alter the output depending on braking effort.

The huge roof with its red tinted glass glides open electrically to reveal an equally red interior. The driver and passenger must straddle wide sills, trimmed with British-made leather, before dropping low into the seats, looking forward across a red dashboard made of layered wood, featuring inset luggage – just for two, of course.

The dash features one long curved OLED screen with a lower LED touchscreen that features most controls, except for a couple of tiny touchscreens on the steering wheel. 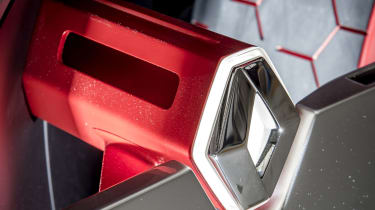 And as Trezor features fully autonomous driving modes, the rectangular steering wheel widens automatically to allow the driver to watch a movie on the screen in front. At the same time, the lighting around the car indicates autonomous mode.

Van den Ackar’s romantic view of car design certainly seems to be working, with Renault sales continuing to climb (up 15% so far this year) and it’s cars and dealers showing others how it should be done in our Driver Power satisfaction surveys.

Welcome to our Paris Motor Show hub page. Scroll down for all our Paris content...
Official: Renault 5 reborn as compact EV due on sale by 2025 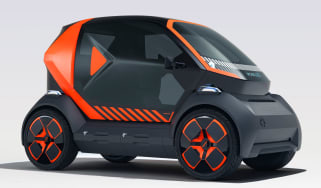