The most efficient Renault Kadjar emits just 111g/km of CO2 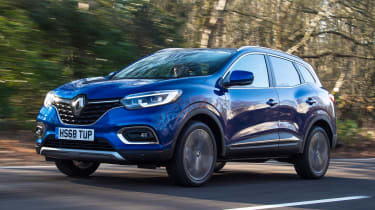 Changes to the Kadjar range in 2018 introduced exhaust particulate filters to the entire engine lineup. This in part helps to deliver impressive fuel consumption results: the 1.5 dCi diesel auto returns 67.2mpg on the combined cycle and excellent CO2 emissions of 111g/km. The manual option is only marginally behind, with official figures of 65.7mpg and 113g/km. Combined with the Kadjar’s 52-litre fuel tank, that gives the 1.5 dCi a potential range of 768 miles.

Meanwhile, the 1.3-litre petrol manual (in both 138 and 158bhp forms) returns 47.9mpg and emits 134g/km CO2 - making it less efficient than either of the diesels. However they're still pretty much class-leading figures in the crossover segment, especially considering the power and torque outputs. The automatic version is more frugal still: it achieves 51.3mpg and 131g/km of CO2.

Insurance groups are yet to be confirmed for the new 2018 Kadjar. However, the pre-update car offered very favourable ratings compared to its rivals, so it looks likely that the Renault will have very competitive costs compared to its closest rivals. 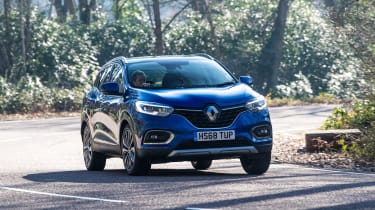 While the official residual values for the updated Renault Kadjar have yet to be confirmed, the figures for the outgoing model were actually very good. Some of the entry-level models (which admittedly have less value to lose) can retain as much as 47 per cent of their list price during the first three years of ownership.

Most sit between 42 and 45 per cent, which rates favourably against rivals. It’s on a par with the Nissan Qashqai (44-48 per cent) but slightly behind the Mazda CX-5, Ford Kuga and MINI Countryman, which all sit in the high 40s and early 50s. However, the Renault Kadjar still represents good value for money thanks to its low list price and long list of standard kit.