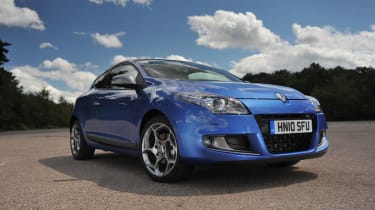 There’s lots to like about the Mégane GT. Its 2.0-litre turbo engine and Renaultsport-tuned chassis provide pace and agility, but not at the expense of refinement. The stylish three-door coupé body looks good, cabin quality is brilliant and so is the level of standard kit. However, it’s missing an edge that the faster, more involving Renaultsport models have, and it’s expensive compared to rivals.

When it comes to building hot hatchbacks, Renault is among the masters. Its fiery Mégane 250 is one of the best around, offering storming pace and razor-sharp handling.

So how does this slightly less powerful ‘warm’ Mégane GT fare? We got behind the wheel of the Renaultsport-tuned car for the first time on British roads to find out.

The Mégane’s handsome styling is at its best in this three-door guise, and despite not being able to match the road presence of the RS 250, the GT’s 18-inch anthracite alloys, deep front bumper and rear diffuser all help it stand out.

Under the skin, Renaultsport has tweaked the GT’s suspension with parts from the 250 that are aimed at improving steering response and reducing body roll, and fitted the same Dunlop Sport Maxx tyres which appear on the flagship.

The results are impressive, as the GT grips strongly and has to be pushed very hard before the nose begins to run wide. However, this doesn’t come at the expense of a comfortable ride.

The 2.0-litre turbo engine gives rapid performance, with 0-62mph in 7.8 seconds and plenty of torque for overtaking, although the coarse exhaust note is somewhat off-putting.

Similarly, the over-assisted steering doesn’t give you the confidence to exploit the chassis – it weights up artificially at speed, but the wheel still lacks feel. Inside, there are plenty of GT badges on show, and the comfortable leather seats hold you firmly in place. The dials are tilted up and away from the driver, which is distracting at first, but cabin quality is high and the GT is well equipped: TomTom sat-nav, cruise control and air-con are all standard.

However, price is a stumbling block. This petrol version costs £22,410, which is only £750 less than the basic RS 250 Cup. While this is a fast Renault that’s good to drive, it’s not a great one.