Renault has revealed UK prices and specs for its practical Renault Megane Sport Tourer estate ahead of its on sale date. 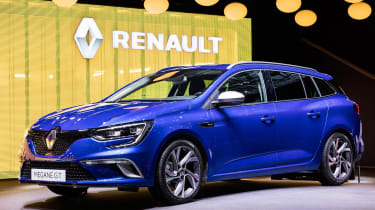 Renault has revealed full prices and specs for its new, Megane Sport Tourer ahead of the new estate car going on sale in the UK in December 2016. Megane Sport Tourer prices will start from £18,550, making it a little more expensive than the Ford Focus Estate, but slightly undercutting the starting prices of the SEAT Leon ST and the Volkswagen Golf Estate.

From launch four engine options will be available – two petrols and two diesels. There’s also a handful of trim levels to choose from, and plenty of optional tech.

For the £18,550 starting price buyers will be getting the Renault Megane Sport Tourer in entry level Expression+ trim with the TCe turbocharged petrol engine. It’s a 128bhp 1.2-litre, and while it’s mated to a manual gearbox as standard, Renault’s seven-speed EDC automatic is available too for an extra £1,200. Fuel economy is claimed at 53.2mpg, with CO2 emissions of 120g/km. 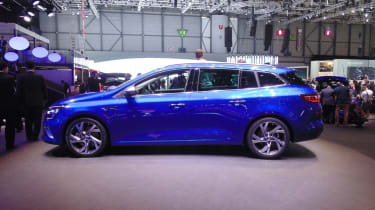 The other petrol option is the most powerful choice by far, and is only available on top spec GT Nav cars and with the automatic gearbox. With 202bhp, it’s capable of sending the Megane Sport Tourer to 62mph from standstill in 7.4 seconds, and onto a top speed of 145mph, priced from £27,450.

Choosing one of the diesels will make the most sense for many buyers given the lower running costs. The cheapest option is the 108bhp 1.5-litre diesel, starting from £19,850. With a manual gearbox Renault claims it’ll deliver 76.4mpg, while the 96g/km CO2 figure means it sits in VED band A and is road tax free. Even opting for the automatic version keeps CO2 below 100g/km. 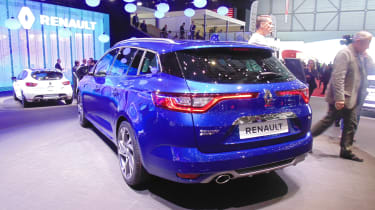 The range is set to expand next year with the arrival of a hybrid and a new diesel model. The Megane Sport Tourer Hybrid Assist will use a 1.5-litre dCi diesel engine with electric assistance, while a new 164bhp 1.6-litre twin-turbo make its way into the range topping GT Nav model.

In terms of equipment, entry-level Expression+ cars will get daytime LED lights 16-inch alloy wheels, a leather steering wheel as well as Bluetooth and AUX connectivity as standard.

Step things up to Dynamique and automatic wipers and headlights make the cut, alongside a suite of driver assists like lane departure warning, traffic sign recognition, and automatic high/low beam headlights.

Dynamique S cars get the 8.7-inch portrait touchscreen in the cabin, alongside 17-inch alloy wheels, front and rear parking sensors, and a reversing camera. For £400 extra these cars upward can be equipped with adaptive cruise control, distance warning and automatic emergency braking. 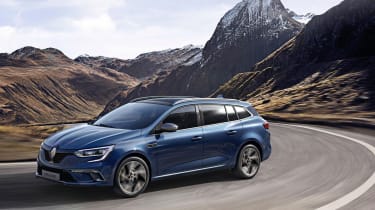 GT Line cars are based on Dynamique models but get sportier bodywork such as the honeycomb grille and lower, wider air intake. Inside, they get sports seats finished in fabric or Alcantara for an extra £1,200, as well as a GT line badged sports steering wheel.

In terms of design, this more practical Megane is set to build on the dramatic overhaul that’s just been completed by Renault’s chief designer Laurens van den Acker on the fourth generation of the conventional five-door hatchback.

The oversized diamond badge and LED daytime running lights are carried over, as is the hatchback’s complex rear-end treatment, which features a strip of LEDs between the tail-lights. However, the estate gets an extended rear overhang in a bid to boost boot capacity to around 1,600 litres with the back seats folded down.

Renault hasn’t resorted to extending the Sport Tourer’s wheelbase over the hatch model’s, but the fact that the Megane is one of the wider cars in its class should give it a reasonably athletic stance. That width could also help the interior, freeing up space across the rear row of three seats. 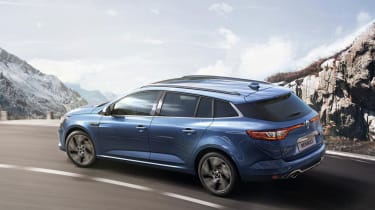 Renault has also announced that the Megane Sport Tourer will be the first C-segment estate to feature four-wheel-steering. Renault's 4CONTROL system will be available on the car to boost low speed manoeuvrability as well as handling precision at higher speeds.

Renault is also said to be considering allowing its Renaultsport performance division loose on a full-blown 300bhp version of the Sport Tourer, which would be a rival for the Golf R and Focus ST estates. However, it’s some way off even if it does get the green light; it’ll have to wait until the hardcore Renaultsport version of the Megane hatchback arrives first, and that’s not due until late 2017 or early 2018.

What do you think of the new Renault Megane estate? Let us know below...

Family estate buyers have never had it so good. We test the Kia Ceed SW against the Renault Megane Sport Tourer and Skoda Octavia Estate