With a range of excellent engines plus a keen price tag, the new Renault Twingo has been worth the wait 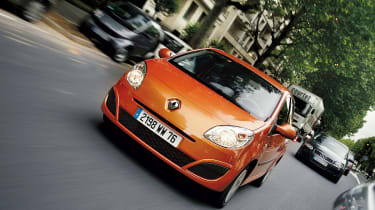 The new Twingo has been worth the wait. Renault has thought hard about practicality, and the clever sliding rear seat arrangement makes the most of the car's tiny dimensions. The looks are cute - if nowhere near as distinctive as those of Fiat's new 500. And, with a range of excellent engines plus a keen price tag, the Twingo deserves to succeed. On the evidence of this early test drive, Renault is on to a winner.

The Twingo is go! The little car with the big personality has hit the road - and Auto Express was first behind the wheel for an exclusive test drive.

One of the undisputed stars of this year's Geneva Motor Show, the Twingo stole the limelight at the Swiss spectacular with its blend of cute styling and interior versatility.

This time, though, Renault is launching a full attack, and from September, the Twingo will be available as a right-hooker for the first time. It's set to take on Citroen's C1, Kia's Picanto and Ford's new Ka.

This basic version will arrive in late 2008, priced at around £7,000. And although it lacks the sportiness of the other two, it's neatly styled. Mixing Renault's familiar design cues with an all-new front end, the Twingo is distinctive, with large headlights and a low front air intake.

Yet the Twingo's trump card is its versatility. And while it's only 3.6 metres long, Renault's engineers have made it amazingly spacious. The two separate rear seats can slide back and forth by up to 22cm, creating plenty of room for a pair of adults. With only two up front, the chairs can be moved forward to boost the load capacity from 165 to 285 litres. And with the ability to fold flat (that also includes the passenger's seat), there's a maximum 959 litres of luggage room in the little car.

When it comes to engines, from launch the Dynamique variant will have a 75bhp 1.2-litre naturally aspirated powerplant, while the sportier GT gets a 100bhp 1.2 turbo. The 1.5-litre dCi diesel we tested is also on the cards - although it hasn't been given the green light for the UK yet.

On our drive in Paris, we couldn't put the chassis fully to the test, but the Twingo performed well at urban speeds. With accurate steering, a comfortable ride and impressive agility, it's every inch the grown-up city car.