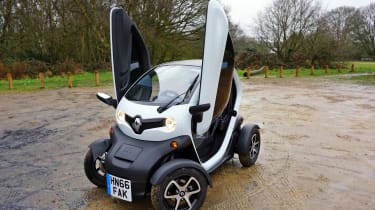 The Twizy Cargo is the nichest of niche commercial vehicle choices. Electric vans are a specialist purchase in themselves, and the Twizy's small carrying capacity and electric drive mean it will only appeal to a very small sector of the market that needs a small, short-range vehicle. Still, it could be a great advert for your business, and the running costs are significantly lower than they are for any other kind of four-wheeled commercial vehicle. But would a maxi scooter suit your needs any better? After all, this would be able to fit through gaps even the Twizy couldn't.

There's nothing quite like the Renault Twizy in the new 'car' market. We use the 'car' tag advisedly, because the small electric city runabout is classified as a quadricycle - you only need a motorcycle licence to drive one - while its 50mph top speed and claimed 62-mile range mean it won't be going very far anyway.

But that hasn't stopped Renault from expanding the Twizy range to include a fully-fledged commercial version, the Twizy Cargo. While the Cargo is mechanically identical to the standard model, it has half the number of seats. Rather than having a passenger chair in tandem behind the driver's seat, there is a large load area, which is accessed via a door in the back of the Twizy.

• Can an electric van work for your business

The load area is lockable, and there is 31 litres of space on offer. That might not sound like much, but the load area is large and uniform in area, with a square recess in the floor that's about the size of a 12-inch pizza box that will help stop items sliding around. Using the pizza box measurement, there's enough room in the load area to stack about 20 boxes before you reach the top of the load area, although there is a 75kg weight limit that applies to the boot, too. 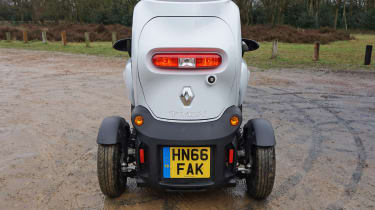 You can stack the boot high with items, although you're limited slightly by the size of the boot opening, and the side-hinged door can be a fiddle if you've parked awkwardly: If you're tail-on to the kerb, then there's no problem, but if you've reversed hard against a wall, then you may only be able to access the boot from one side. Either way, having a full boot doesn't compromise rearward visibility, as the fully enclosed space is directly behind the driver, out of sight.

The Twizy Cargo drives exactly like its two-seater counterpart, and it's a bit of a unique experience. The open-sided cockpit means you're exposed to the elements like a scooter - Renault does offer doors as an option, but then the cockpit still isn't fully enclosed. It's best to wrap up if you're driving in cold weather, because there's no heater, and the wind and rain can blow in around the windscreen, too.

Turn the key, and the Twizy beeps to let you know it's ready to go, then you press the 'D' on the dashboard to put it into gear, and you're away. There's no 'creep' from the automatic transmission like in a regular auto, so you have to give the throttle pedal a fair old stab to get the Twizy Cargo moving, but once you're on your way, the Twizy moves silently on electric drive. The steering is unassisted, so while the tight 6.8-metre turning circle is extremely useful (that's around five metres less than a Clio), it's best to get your steering done while you're still moving, rather than at a standstill. 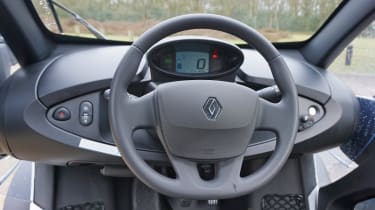 The brakes don't have any servo assistance, either, so you need to give the pedal a decent shove to get the disc brakes working, too. The handbrake is a lever under the dashboard, and is the only thing that stops the Twizy from rolling off when stopped, because there is no Park mode for the push-button auto box, just Drive, Reverse and Neutral.

On the move, the Twizy Cargo isn't the most comfortable of vehicles. The suspension delivers a rock-hard ride, and the Twizy crashes into potholes and picks up every bump in the road - this isn't the kind of delivery vehicle you need if you're transporting pieces of fragile pottery, for example.

The handling is surprising, because the Twizy's tall, narrow body makes it look like it'll topple over at the slightest hint of a corner, but because the heavy lithium-ion battery and running gear is all mounted low down between the axles, the Twizy is alright in corners, and there's decent grip from the tyres.

If you can justify the Twizy's cargo capacity, the next stumbling point will be your ability to charge it up. It only comes with a three-pin mains plug - there's no hi-tech charging point options here - although the battery can be fully charged in three-and-a-half hours. That gives you a claimed range of 62 miles, although if you give yourself a workable range of 40 miles between charges, that should be reasonable. As there's no heater or any other electronics, then the battery range should remain pretty consistent.

The battery itself is leased on top of the £8,000 price of the Twizy Cargo itself. This can range from £45-£67 a month, depending on the deal you negotiate. In comparison, a scooter would easily manage 90mpg, and with a tank of fuel coming in at less than £20, you need to do the sums carefully to see if the Twizy's outlay will justify its costs.