The latest update to the Renault ZOE boosts range, but does this electric baby add up on UK roads? 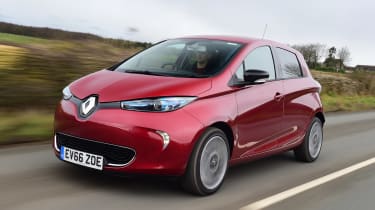 A real-world range of between 120 and 180 miles means the ZOE still can’t compete with petrol or diesel supermini rivals for practicality and usability. But new fast charge tech and a more extensive equipment list make the electric Renault a more attractive proposition than ever. For those with the right lifestyle it’s a decent choice, but for others the EV remains a niche contender.

The Renault ZOE is arguably the most mainstream EV currently on sale. A relatively low list price, conventionally styled body and practical interior all lend it to everyday use, while the updated model’s improved range should force more electric car sceptics to sit up and take notice.

Our first taste of the car last year left us a little cold, however. While officially this new Z.E. 40 model should do 250 miles on a full charge, even Renault admits that figure is likely to be closer to 180 miles in the real world. In winter, that could tumble to 124 miles – much less than you’ll get on a full tank in a conventional petrol or diesel-powered supermini.

But does this new version make sense as a second car? Or perhaps for those looking for a cheap-to-run urban workhorse? We’ve grabbed the keys in the UK to find out.

As we set off on a dark, windy February day, our car’s fully charged battery displayed a total range of 143 miles. That’s in line with Renault’s predictions, and a good starting point to test the ZOE on real roads. Perhaps surprisingly, the range fell fairly accurately, with a mix of roads seeing a 10-mile dip for every eight or nine miles covered.

The subtle regenerative brakes help, too, topping up the charge as you come to a halt. Our range tumbled as we moved out of town and on to faster roads, but few owners are likely to often explore the performance. 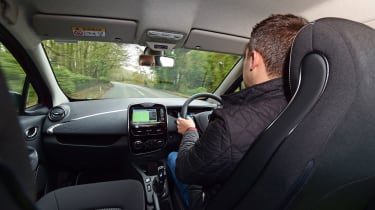 It’s in the city where the ZOE excels. The instant acceleration isn’t as forceful as in a BMW i3, but it’s easily a match for the pricier Volkswagen e-up!. Light steering makes it easy to manoeuvre, while dinky dimensions ensure it’s a doddle to park – especially with our model’s £250 rear view camera. 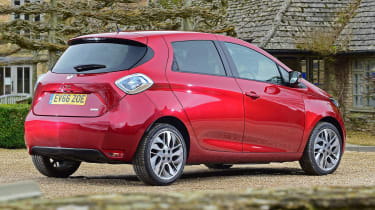 It’s worth noting, however, that the list price we quote doesn’t include battery rental, which starts at £59 per month depending on your average annual mileage. It’s an extra cost not associated with conventional cars, but Renault promises to replace them if they ever dip below 75 per cent efficiency.

All cars also come with Renault’s clever Chameleon charger, which automatically adjusts the voltage to suit electricity flow. Our model didn’t have the Q90 fast charge tech; you can add it for £750. ZOEs with it can top up to 80 per cent in under two hours; a three-pin plug takes 10 times as long.