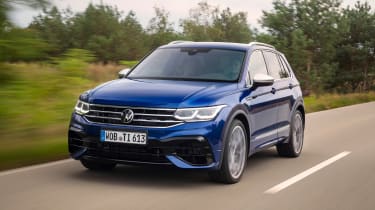 The Volkswagen Tiguan R succeeds as a hot SUV because of its versatility. In comfort mode it’s barely any more taxing than a 2.0-litre TDI model and rides arguably better than the standard Tiguan line-up, owing to adaptive suspension. However, there’s ample performance  when you want it, and for a heavy SUV it handles pretty well, too. But prices are yet to be confirmed - so it could look expensive alongside the next Golf R Estate.

A hot version of the Tiguan - VW’s most popular seller globally - has been on the cards for some time now. It finally launches to coincide with the mid-life facelift applied to the second-generation model, and ahead of what will be a glut of new R models coming this year and next: the 456bhp Touareg R, the sleek Arteon R and of course, the next Golf R hatchback.

Volkswagen has offered a fast version of the Tiguan before in the form of the 237bhp 2.0-litre BiTDi diesel, but the new Tiguan R is a wholly different proposition. It’s here to stand out from the rest of the refreshed Tiguan line-up rather than quietly form a part of it, and that begins on the outside with a typical R-division visual makeover.

Painted in trademark Lapiz Blue Metallic (other paints are offered though), the Tiguan R receives all the usual R-specific modifications. A front bumper with a sporty lower apron and plenty of ventilation is joined by 21-inch wheels, bright blue brake calipers, chrome detailing, a rear spoiler on the boot lid and a new rear diffuser housing a quad exhaust system.

Inside, it’s mainly standard Tiguan save for a new sports steering wheel with haptic buttons and a new R button placed on one of the multifunction spokes. Stainless steel pedals, new faux carbon dashboard inlays, and sports seats with fixed headrests, trimmed in cloth, leather and Alcantara, round off the mild interior makeover. Quality remains as you’ll find in the normal Tiguan - it feels very well built with a mixture of nice soft touch plastics and materials.

A large 9.2-inch central touchscreen display sits in the centre of the dash featuring smartphone-linking apps, navigation and all of the new voice control features packed into the VW Group’s new MIB 3 system. Digital instruments also feature, and all of the menus and graphics get a subtle R makeover. 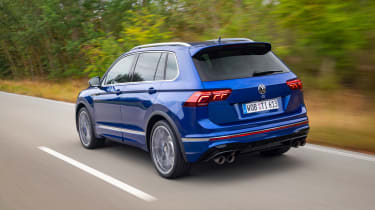 The most important aspects lurk beneath the sportier looks, of course, in the form of a new engine and significant chassis and driveline developments over any Tiguan produced thus far.

Under the bonnet is a familiar sight - Volkswagen’s 2.0-litre four-cylinder petrol engine, installed in a vast number of performance cars across the VW Group empire. Here in the Tiguan R it develops 316bhp. That’s 20bhp more than in the Tiguan R’s smaller, lighter sibling - the T-Roc R - and goes some way to compensating for the Tiguan’s extra heft, tipping the scales at a considerable 1,746kg.

The Tiguan R also receives adaptive dampers as standard, and they’re a crucial part of this car’s appeal: its flexibility.

Left in comfort mode it’s barely any different to drive to any other Tiguan. It’s quiet, and comfortable, the ride quality of the adaptive suspension in its softest settings offsetting the sportier chassis tuning with its lower ride height. It’s extremely compliant, soaking up bumps around town and riding smoothly on motorway cruises, meaning that the Tiguan R still nails the brief of being a comfortable family car. 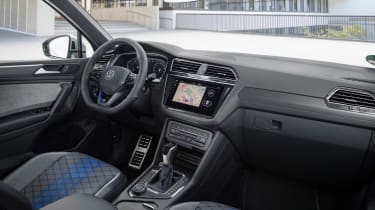 Hit the new R button on the steering wheel and push the Tiguan into Sport, and the pace begins to pick up and the steering sharpens. However, it’s when you push into Race mode that the package really comes alive.

Be in no doubt - the Tiguan R is a very fast car, and the way the engine revs around to 6,500rpm with ferocity on full boost is quite an astonishing character shift compared with the relaxed cruiser it is in comfort mode. Sound actuation through the speakers covers up the true note of the optional Akrapovic exhaust system, but if you flitter into Individual mode, allowing you to pick and choose whatever drivetrain and chassis settings you like, it can be removed from the experience.

Unsurprisingly, the steering is devoid of any real feedback, but it’s accurate and darty, while the variable-ratio nature means you never need to work hard with your inputs.

The Tiguan R handles nicely for a tall SUV, easily placeable and with bags of grip thanks to a new rear torque vectoring system. Torque can now be distributed completely from one rear wheel to the other; you can pin the throttle so early on the exit of a corner, and you’ll feel a little tug at the rear axle as the torque distributes for maximum traction, and you slingshot out the other side.

It’s not just suitable for on road fun. While the Tiguan R feels accomplished on the tarmac, whether you’re ambling around town or enjoying a B-road, it comes with off-road and snow drive modes for the four-wheel-drive system too, should you ever need them.