We get behind the wheel of stunning new baby Rolls. Is it the world’s best luxury car? 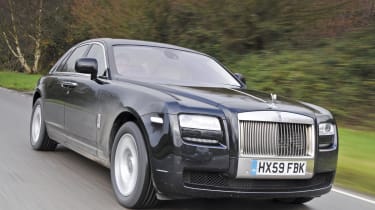 The Ghost provides the opulence, refinement and sense of calm that is so important in a Rolls-Royce. Yet it’s also the famous British manufacturer’s most dynamic car yet, thanks to that technically advanced chassis and massive performance. The beautifully appointed cabin blends classic luxury with modern efficiency – so the lucky few who can afford the £200,000 price won’t be disappointed.

One of the most revered names in automotive history is back. Rolls-Royce first used the Ghost badge in the early part of the 20th century – and now it’s returned on the new, smaller stablemate to the mighty Phantom limousine.

The modern day Ghost is based on the 200EX concept, which debuted at the Geneva Motor Show back in March. It’s 44cm shorter than the flagship Rolls – measuring 5,399mm in length – but is faster and more powerful. In addition, it costs £80,000 less, although it still looks every bit as glamorous as you would expect for a car wearing the legendary Spirit of Ecstasy mascot on its nose.

The imposing shape of the Phantom has been successfully carried over – but the smaller dimensions mean the Ghost looks more natural than its gargantuan big brother. It’s still a very large car though, tipping the scales at 2.4 tonnes.

Inside, there’s a stunning blend of classic and modern. Rolls’ traditional violin key switches and eyeball vents are mixed with the finest materials, as well as a cabin control system based on owner BMW’s iDrive set-up. That aside, there is no blue propeller switchgear on display – every button and dial is unique to the British manufacturer. Plus, all the controls are laid out logically and weighted beautifully for precise operation.

In the back, the traditional rear-hinged coach doors open to reveal a sumptuous passenger space. The sense of luxury and refinement you get inside the Ghost is amazing – but Rolls buyers expect that. What’s likely to surprise them is the performance on offer. Under the bonnet, the new 6.6-litre twin-turbo V12 – exclusive to this car – produces 563bhp.

It also delivers a huge 780Nm of torque from only 1,500rpm. That translates into sports car performance, with the sprint from 0-60mph dispatched in 4.7 seconds and a top speed limited to 155mph.

This staggering forward thrust is effortless, though,and you also get the sense that the car shrinks around you on a twisty road. As long as you are precise with the steering, the Ghost can be driven with the sort of enthusiasm normally reserved for a sports saloon. Amazing levels of grip inspire confidence, and while the body leans in corners, the active anti-roll dampers ensure this movement is well controlled. On top of that, the huge brakes wipe off speed reassuringly. If only the large door mirrors didn’t cause such nasty blind spots at junctions.

Impressively, the Rolls’ composure hasn’t come at the expense of ride comfort. The advanced air-suspension irons out imperfections in the road with aplomb. The eight-speed auto box adds to the sense of calm with its seamless shifts. Hi-tech options include night vision, adaptive cruise control, lane departure warning and head-up display. But what makes the Ghost so special is its luxury, power and comfort.

Rival: Bentley Mulsanne Production of the mighty saloon will begin in the spring. With power from a 505bhp twin-turbocharged V8 engine and incredible luxury, it will meet the new Rolls head-on.