The entry level Rolls-Royce, the Ghost is sharper looking, packed with more technology and feels as special as ever 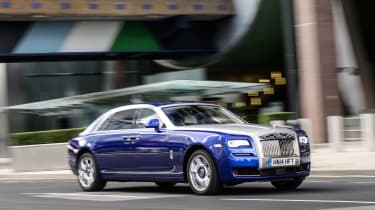 Subtle styling and technology tweaks make the Rolls-Royce Ghost a more complete package than ever. Yet with all this technology under the skin, it’s brilliantly simple to use and retains Rolls Royce’s unique old-fashioned flavour. The new Mercedes S-Class is probably more comfortable, and a whole lot cheaper, but then it doesn’t look or feel half as special as the Ghost.

Since launching its ‘entry-level’ saloon in late 2009, Rolls-Royce has sold three Ghosts for every Phantom. As a result it enjoyed its fourth consecutive year of record sales in 2013 and expects to break the 4,000 unit barrier for the first time in 2014. Clearly, this mid-life refresh for the Ghost is crucial to get right. The design team has resisted the temptation to tinker too heavily with the styling, although new wider and slimmer LED lights and a reshaped front bumper and fenders differentiate it from its predecessor. You’ll need a keen eye to spot that the grille has been raised by 30mm, there are new creases down the centre of the bonnet and the Spirit of Ecstasy is angled forward by a further seven degrees.

The interior - perhaps more poignant in a luxury car of this calibre - is fitted with new seats front and rear, although we never had any complaints about the old ones. Extendable thigh supports in the front mean even the tallest passengers can drive in supreme comfort, while rear seats tilted towards each other supposedly create a more social atmosphere in the back – we struggled to notice the difference. 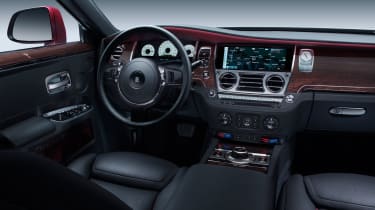 However, the quality of leather and craftsmanship on our ‘standard’, short-wheelbase test car didn’t escape out attention; it surpasses the S-Class by quite some margin and leaves the Bentley Flying Spur in the shade. We particularly enjoyed the crystal-topped rotary knob and the deep shag pile carpets that encourage you to kick off your shoes. And if the ultra modern black, white and chrome colour scheme of our test car is too generic for you, Rolls is happy to oblige with 14 difference veneers, any embroidery you can dream up and exotic hides ranging from ostrich to alligator. In terms of new technology – those LED headlights aren’t just for show. Moving reflectors point the beams around corners and sensors spot oncoming traffic and block the beam to avoid dazzling them. The same eight-speed auto as the Wraith, which uses information from the sat-nav to prep the gears, is so silky in its operation you rarely feel it swapping cogs, while the 563bhp 6.6-litre V12 is carried over untouched. To drive, the new Ghost is as imperious as ever. Squeeze the throttle and the V12 thrusts you forward with pace to spare (something we can verify thanks to the trademark ‘Power Reserve dial’). The V12 never sounds particularly exciting, but you quickly learn that despite being more compact than the Phantom, the Ghost is still a large, heavy car to drive and feels massive on British country lanes. The light steering refuses to load up in corners, give it full throttle and the nose tips towards the sky and while it grips hard in corners it also leans dramatically on the outside suspension. 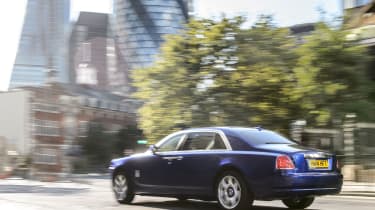 Far better then to take it easy and let the Ghost do what it does best - waft along swiftly and silently. Unlike some luxury rivals that swamp the driver in endless chassis and powertrain settings, the Ghost doesn’t have manually adjustable suspension, a ‘Sport’ button, configurable steering or gearshift paddles behind the wheels – so you’re free to just get on with the business of driving. Our test car was fitted with 21-inch wheels (19s are standard), which tend to thump as they drop into potholes or hit speed bumps, but on level surfaces the Ghost floats along like few other cars on the road. If you’re more likely to drive yourself than be chauffeured, then a Dynamic Driving Package tightens up the suspension and quickens up the steering, but we wouldn’t bother. The Ghost needs to be appreciated for what it is – a luxury car with an unrivalled sense of occasion built for comfort not cornering speeds.