Turbos have long been a Saab trademark. In 1977, the Swedish firm became an innovator when it unveiled the 99 Turbo - the first really successful blown saloon. A host of Saab Turbos have followed, and today there's not a model in the company's line-up that doesn't come with a turbocharger attached. 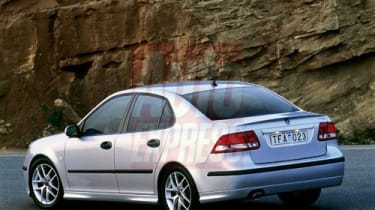 The newcomer isn't dramatic enough to set enthusiasts' pulses racing, and the standard 2.0t models are nearly as swift and cost less. If Saab is aiming to be subtle, there's little point in the Aero. And if it wants to create a breathtaking performance model, it needs to try much harder.

Turbos have long been a Saab trademark. In 1977, the Swedish firm became an innovator when it unveiled the 99 Turbo - the first really successful blown saloon. A host of Saab Turbos have followed, and today there's not a model in the company's line-up that doesn't come with a turbocharger attached.

So why has Saab turned to Japan to source the blower for its flagship 9-3? The answer is that the company wants to reinject some drama into its sporting range-topper, and rather than develop a new turbine system for what will be a relatively low volume car, it has borrowed a larger Mitsubishi turbo unit to give the new 2.0 HOT (High Output Turbo) Aero a big boost. The beefier blower means the engine now develops 210bhp, with a decent torque figure of 300Nm at 2,500rpm. There's very little lag, and the turbo is barely perceptible other than for a shrill whistle under hard acceleration.

It might not be the fastest car in its class off the mark, but in-gear thrust between 50-70mph is incredibly quick, and aerodynamic efficiency is significantly better than that of standard 9-3s. Subtle spoilers have cut front and back-end lift by 70 and 40 per cent respectively, and the result is a car that feels much more settled and stable at speed. What's more, firmer suspension offers greater control on twisty, undulating roads. Buyers have a choice of six-speed manual or five-speed automatic gearboxes, the latter with a manual shift facility. Of the two, we favour the auto, because it's less of a handful under acceleration, and the high torque figure means there's little loss in performance terms.

The Aero also comes with an interior trimmed with slate grey or beige leather. While the cabin is ergonomically well laid out, as with other 9-3s there is a baffling array of switches for the climate and audio functions, while the fit and finish on the centre console and handbrake could be better.

Overall, the Aero is a swift, comfortable and luxurious compact cruiser - but does it recall Saab's past turbo-charged glories? Not really. Quick and calm, rather than fast and frantic, are the order of the day. The Aero is pleasant enough, but does little to excite.