Sporty diesels are proving to be very popular additions to manufacturers' ranges these days, so when Saab announced the arrival of its latest 9-3 TiD in the UK, Auto Express was first in the queue to have a go behind the wheel. 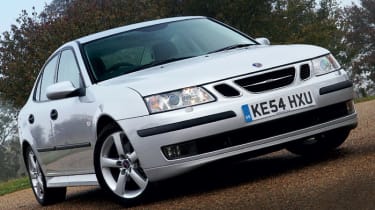 By introducing a new oil-burning powerplant, Saab has turned the best model in its current line-up into a genuine contender. The 9-3 TiD's discreet styling and deceptive pace will win buyers' hearts, while the engine's economy and low emissions will win their minds. Sport trim is pricey, but it comes well equipped.

Sporty diesels are proving to be very popular additions to manufacturers' ranges these days, so when Saab announced the arrival of its latest 9-3 TiD in the UK, Auto Express was first in the queue to have a go behind the wheel.

The executive saloon's new 1.9-litre engine may be smaller than the outgoing 2.2-litre motor, but power has increased by 25bhp to 150bhp. A less potent 120bhp variant is also on offer, although for our first drive on British roads, we opted for the range-topping Vector Sport.

This latest Saab diesel is the General Motors unit that's been developed with Fiat, and it features the latest common-rail technology. Coupled to a close-ratio six-speed manual box, it gives the car a brisk turn of pace - but a 0-60mph time of 9.5 seconds gives little indication of the performance on offer.

The 16-valve oil-burner is smooth and free revving, so enthusiastic driving means the stubby gearlever gets plenty of use. Thanks to the snappy change, that's no hardship, though.

At low speeds, the 315Nm of torque available can easily have the stability assist light on the dash flickering, particularly in the wet road conditions we encountered. But it's at higher speeds where the 9-3 makes most sense.

Motorway cruising is effortless, and there's always plenty in reserve. Almost too much in fact, as the refined engine and quiet cabin combine to mask the sensation of speed and make the TiD deceptively fast. Given the sporty nature of the new model, it's no surprise the ride is firm. However, it remains compliant, and is a good overall compromise.

Agile handling is the result, so it's a shame the steering, which is accurate and direct, provides so little feedback. Along with the uninspiring exhaust note - which leaves you in no doubt as to which pump to use when it's time to fill up - this is the only real letdown.

The introduction of the new Euro IV emissions-compliant diesel coincides with the axing of Arc trim in favour of a new Sport spec. Our Vector Sport 9-3 came with 17-inch alloy wheels, electronic stability control, reverse-parking sensors and an updated information and entertainment system as standard.

However, this model is pricey, and we would favour the lower-specification Linear Sport - which retains the Vector's dual-zone air-conditioning, front foglights, leather upholstery and cruise control, but is £1,500 cheaper.