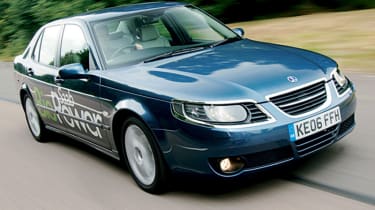 Bioethanol boosts power and cuts emissions, but few outlets sell the alternative fuel. While the 9-5 can happily run on unleaded, its £600 price premium and dated dynamics make the BioPower Saab a clever but unappealing prospect – unless you live next door to a garage that stocks the green stuff.

Alternative fuels and green technology are big news these days – barely a week passes without the introduction of yet another new eco-friendly solution that’s promising to save the world.

But until a single system or idea steals a clear lead on the rest, deciding which to put your money on is a lottery. Choose the wrong one, and you could end up losing out in a big way.

Bioethanol is one of the latest options, and along with the Ford Focus Flexi-Fuel, Saab’s 9-5 is among the first cars to use it. Reassuringly, the clever BioPower range allows the model’s 2.0-litre engine to also run on unleaded, which means if you can’t find a garage selling the alternative fuel, you can simply brim it with petrol and continue your journey. The nifty engine management will sort out the rest, optimising performance from the resulting mixture.

Sounds good so far, but there is a major problem. Only a handful of outlets currently sell bioethanol in the UK – and the few that do are confined to predominantly rural areas.

That’s a shame, because if you run the 9-5 on unleaded you’ll get only 150bhp instead of the 180bhp available from the eco-friendly stuff, and the 0-60mph time increases by 1.3 seconds.

On the plus side, bioethanol is slightly cheaper than petrol and Saab says it reduces CO2 emissions by 50-70 per cent compared to conventional unleaded. Still, because the car’s official CO2 output of 204g/km is measured using petrol, there’s little benefit for com-pany car drivers – especially as it costs £600 more than the standard model.

The good news is that when cruising, you won’t notice which fuel is being supped, despite the difference in power. Elsewhere, it proves similar to the standard machine, with too much body roll and a soggy ride.

A dated cabin design also makes it hard to recommend – and BioPower does little to boost the car’s appeal. Only the shortage of rivals makes the Saab worth considering if you must have an executive car that drinks bioethanol.