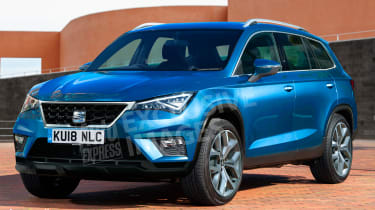 SEAT has confirmed that it will introduce six new models in the next three years as part of the brand’s largest ever product expansion. At least half of those models will enter segments that SEAT doesn’t currently occupy.

The first all-new model to arrive will be a new large SUV, which will go on sale next year and will compete with the Skoda Kodiaq. The design of the vehicle is complete, while SEAT is currently holding a public vote that will decide on its name.

Another of three all-new models will be a bespoke electric vehicle based on the VW Group’s MEB platform. It will arrive in 2019, and bosses have confirmed it will have a range of up to 500km (310 miles).

Speaking at the official reveal of the SEAT Arona, Matthais Rabe, SEAT’s R&D boss, told Auto Express: “With these six new models we will enter at least three new segments. There will be three replacement models but three will be totally new.

“We have plans up to 2025 on the product side. We are now coming to the biggest product phase.”

A replacement for the Leon hatchback, which will usher in a new design language for SEAT, is also on the cards. It’s likely this car will play a leading role in introducing plug-in hybrid technology to the brand. According to SEAT design boss Alejandro Mesonero the all-new Leon will be “a bigger step” than what we’ve previously seen from the Spanish brand and will take SEAT to the “next level.”

As well as expressing an interesting in developing electric versions of its high-performance Cupra models, an Ateca Cupra will launch next year featuring four-wheel drive and a 2.0-litre TFSI engine developing around 300bhp.

Which new SEAT model are you looking forward to seeing? Let us know below...