Back in the early Nineties, Ford and the VW Group had a problem. While rivals enjoyed record sales of MPVs, the best-selling marques in Europe had nothing to offer in this sector. 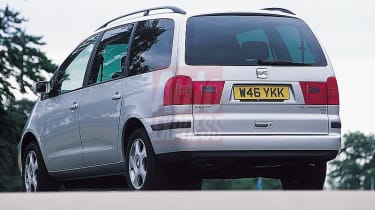 Back in the early Nineties, Ford and the VW Group had a problem. While rivals enjoyed record sales of MPVs, the best-selling marques in Europe had nothing to offer in this sector. In an unprecedented move, the two car giants developed an all-new MPV, using a shared platform and body panels, plus Ford and VW drivetrains. The Galaxy and Sharan debuted in 1995 to wide acclaim - both were functional people carriers that were good to drive. A year later, the mechanically identical SEAT Alhambra arrived - and it was cheaper and better equipped. But its lack of badge prestige saw it sell in limited numbers compared to its blood relatives. The SEAT is the cheapest of the trio used, and is a hugely tempting car for family buyers on a budget.Checklist * Electrical: many 2.0-litres suffer ECU faults, causing starting problems. Water can leak through the window into the electrics box on floor. Check for juddering under acceleration. * Ignition: problems with ignition coil failure blighted early 1.8-litres, and some were recalled. Contact a dealer or visit the recalls section on www.theaa.com for details. * Interior: quite a few Alhambras work as minicabs, so check interior trim for signs of abuse. Also look at the pedals, steering wheel and gearknob for evidence of wear. * Body: panels are huge, so even a tiny dent could mean a big bill for a door skin. Don't underestimate cosmetic repair costs when buying. Some older examples show signs of rust on the tailgate. * Gearbox: early models have fairly weak five-speed boxes that struggle to engage when cold or have a noisy syncromesh. Later six-ratio transmissions are much better.Driving Impressions With a lofty driving position and panoramic windscreen, the Alhambra offers excellent visibility. Dynamically, it's quite lively for an MPV, although 2.0 petrols and early diesels feel sluggish. Turbocharged 1.8-litre petrol models have plenty of power, but 2000-on PD diesels are best, with great responses from the VW-sourced oil-burning units.Glass's View Big MPVs aren't as popular as they were, because of compact models such as Vauxhall's Zafira. The SEAT's advantage is it's better specified and cheaper than its Ford or VW siblings. Petrol versions will find homes, but must be good value, as they're fairly expensive to run. Later oil-burners are more sought after. Initial five-seaters are hard to sell on, so go for seven seats. Post-2000 facelifted models are holding their values strongly, but earlier cars are starting to look tired. Jeff Paterson, Snr Cars Editor, Glass's GuideLife With An Alhambra I was going to buy a Ford Galaxy, but then I realised that, apart from the badges, the Alhambra was the same car. I saved £1,500 by going for the 90bhp diesel SEAT, which is easily up to the job. Mike Roche, Brightlingsea, Essex My 90,000-mile Alhambra 1.8T is a company car, and had a problem with the ECU, which was fixed under warranty. Otherwise, it's been trouble-free. G MacManus, Alloa, Clackmannanshire

How do you add an MPV to your range, without the cost of developing a new model? If you're SEAT, take parent firm VW's Sharan, add Alhambra badges and offer more kit. The bright and comfortable cabin is surprisingly adaptable - the removable rear seats fold to form tables and can slide forward and back. And while the brand lacks the clout of Ford or VW, bargain-spotters will find the Alhambra's mix of equipment and three-year warranty hard to beat.