SEAT's Altea XL handles well, drives nicely and is practical. But it makes the range even harder to fathom 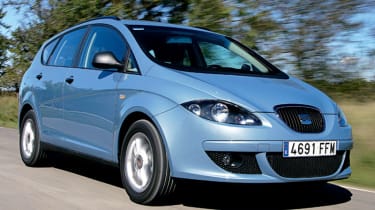 The Altea XL handles well, drives nicely and is practical. But it makes SEAT’s range even harder to fathom, offering all that the standard Altea does but with a larger boot. We reckon this is a niche too far; the firm would have been better off getting its anticipated stand-alone seven-seat compact people carrier to the market sooner, to rival the likes of the Vauxhall Zafira.

Humble pie isn’t a dish car manufacturers often admit to feasting on. However, bosses at SEAT have quite rightly put their egos to one side and confessed that they made a mistake with the current Altea.

Reacting to public demand and fin­ally giving customers what they want, the company is resigned to the fact that it has lost out on sales of the family hatchback because buyers felt there simply wasn’t enough storage space. Its answer is this: the Altea XL.

The newcomer is 18.7cm longer than its stablemate, and the extra metal has been added at the back to create a more estate-like model. As a result, the boot space has gone up from 409 litres in the Altea to 532 litres in the XL.

The model’s other trick is the split-folding rear bench seat; it slides back an extra 2cm – allowing more legroom for passengers – or moves forward an additional 14cm. That pushes it right up against the front chairs, and boosts the overall load capacity to 635 litres. SEAT claims that’s better than any other contender in the class.

For passengers in the back, the XL is certainly spacious, but the increase in legroom is so small that most people won’t notice it. Pulling the seats forward does create a huge cargo area, yet the system would be far cleverer if the backs folded flat rather than leaving an unsightly and impractical lip.

At the model’s launch next January, a 101bhp 1.6-litre petrol engine will be available, along with 104bhp 1.9-litre and 138bhp 2.0 TDI diesels. As these last two variants will undoubtedly be the top-sellers in the UK market, we grabbed the keys to the latter.

Already available in the standard Altea, the 2.0-litre motor is a proven performer, and is not noticeably affected by the additional weight it’s pulling in the XL. The 320Nm of torque is plenty to make good progress. On our car, it was linked to the VW Group DSG sequential transmission, offering drivers the choice of either fully automatic or lightning-quick manual-shift modes.

The XL delivers a refined ride and han­dling, plus sharp, accurate steering. A quick spin in the 1.6-litre petrol model showed it has similar driving dynamics, but the engine feels underpowered and struggles up hills. More units will arrive later in the year, including a 168bhp version of the larger diesel.

There will be three trim levels: the basic Reference, the Stylance and the range-topping Sport Up. SEAT has also struck a deal with sat-nav supplier TomTom, so all but entry-level variants will get a docking unit and portable device built into the dashboard. Prices have yet to be confirmed, but are likely to start from £12,995 for the 1.6-litre Reference. The 1.9 TDI will weigh in at around £14,995, with the 2.0-litre TDI costing £16,895. That makes the XL about £600 more than the equivalent standard Altea. For all buyers, this will be money well spent – but should they really be asked to pay extra for practicality? It’s something that should have come as standard from the start.