We get behind the wheel of the five-door, turbo petrol version of the facelifted SEAT Ibiza 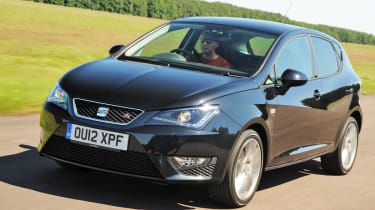 The SEAT Ibiza FR proves you can have fun and still have a car that's relatively cheap to run. The 1.2 TSI petrol engine could have been made for this car, as its responsive nature is perfectly in tune with the FR's sporting edge. In fact, it almost makes the larger 1.4-litre version, and the diesels, seem redundant.

In the cut-throat supermini sector, a car needs to have something special to make it stand out. The VW Polo has an upmarket feel, while the Peugeot 208 majors on comfort. And if you want something sporty, then you need look no further than the SEAT Ibiza.

The Spanish supermini was given a facelift earlier this year, and until the new Cupra hot hatch arrives, the flagship model is the Ibiza FR. It's offered in three and five-door body styles, plus ST estate guise for the first time, and is available with four engines. There's 1.6 and 2.0-litre TDI diesels, plus 1.4 and 1.2-litre turbo petrols. We tried the latter in five-door hatchback guise.

First impressions are good. The new nose gives the Ibiza a sharper look, while the optional LED running lights on our car add to the look. Our car was also fitted with optional 17-inch alloy wheels, while buyers can specify chrome-finished doorhandles and wing mirrors to further enhance the looks.

Inside, the dashboard has been improved, with the large slab of plastic found in the old car replaced by a more sculpted console. FR models get sports seats and a flat-bottomed leather steering wheel as standard, and it's easy to get comfortable behind the wheel. One bugbear on the old Ibiza was the slightly fiddly stereo, and this has been retained in the makeover. There's a single control knob that's flanked by a pair of buttons on the dash, plus a set of controls mounted behind the steering wheel, but it's not very intuitive, and it takes time to get used to navigating the on-screen menus.

There's no such problem with the driving experience. The Ibiza FR is a lively performer, and the 1.2-litre TSI turbo petrol engine suits the FR's sporty character. Throttle response from the 104bhp unit is instant, and with 175Nm of torque, there's plenty of power for overtaking. The gearbox has an accurate shift, but one minor gripe is the fact this engine only comes with a five-speed gearbox - a sixth gear would do wonders for motorway cruising.

In corners, the Ibiza is stable and has lots of grip, thanks to the sporty suspension settings. The downside of this is a stiff ride around town, although the latest FR is an improvement over its predecesor.

But the best part of the 1.2 TSI-powered Ibiza FR is the fact that you get this sporting edge with decent running costs. Fuel economy of 55.4mpg is nearly as good as a diesel - even though there's no stop-start - and emissions of 119g/km keep tax costs low, too.